Thanks to information received from Transport for London (TfL), I am now able to get a fuller picture of the proposed cable car link from North Greenwich to the Royal Victoria Dock. As this has come via TfL Customer Services, I do not consider it subject to the Chatham House Rules, and therefore quote freely from it.

In response to my question on whether there were similar systems with ten person cabins in operation elsewhere in Europe: “There are numerous examples ... in Lisbon and Barcelona among other places”

I plead some knowledge of both: the system in Lisbon is part of the Parque das Nações (Park of Nations), the site of the 1998 Expo. It runs over the waterfront and provides a view of the site. It is not a serious people mover, and nor is the system in Barcelona, which runs from the upper station of the Montjuic funicular to the castle. Both systems have cabins that seat no more than four people. 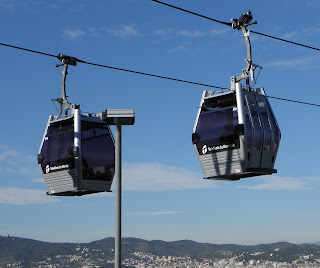 You won't get ten in one of those

According to the planning application for the London system, this will be on a far larger scale than both examples quoted: for starters, the minimum clearance above high water on the river will be a whopping 54.1 metres, or over 180 feet. And of course the cabins will be larger than for those examples.

On capacity, “the technical requirements ... are to be able to operate at ... up to 2,500 people per hour”. A ten person per cabin system running at a 30 second headway (this figure has been widely disseminated) has a maximum one way capacity of 1,200 per hour. As for helping to disperse large crowds after events at the O2 or ExCeL, forget it. But I am told that the proposed system will be fully accessible.

On fares, “Oyster cards will be accepted ... although it is envisaged that it will not be included within the Travelcard scheme. The fares will be determined in due course”.

So what will a journey cost? The Barcelona system gives a clue: compared to a single metro or bus fare of EUR 1.45, and a ten trip Zone 1 ticket at EUR 8.25, the Montjuic cable car costs EUR 6.30 for a single trip and EUR 9 for a return.

On timescale, “TfL is discussing the programme in some detail ... including the potential to open before the 2012 Olympic Games. We will be in a position to confirm the planned programme in the Spring”.

I’m not convinced: my feeling is that financial push will come to shove, and that this will be quietly dropped. Another of Bozza’s wizzo ideas that should have remained just that.