Express – Not Quite Plagiarism (Again)

Yesterday I noted that the Daily Express was running a story that looked very much like a piece in the previous day’s Telegraph, thought allowance must be made for the possibility of pure coincidence. Today, however, it’s happened again, which reduces that possibility and instead suggests that this is an organised practice.

The Maily Telegraph, on Monday – the article is timed at 1641 hours on that day – published a piece titled “Blazing saddles in Spanish fiesta for patron saint of animals”. This was about the annual Luminarias festival held in the village of San Bartolome de los Pinares, where riders coax their horses through flaming bonfires. 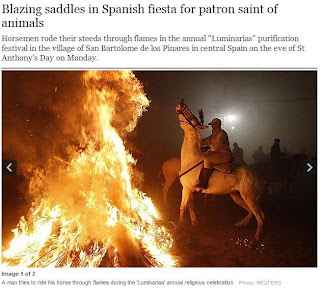 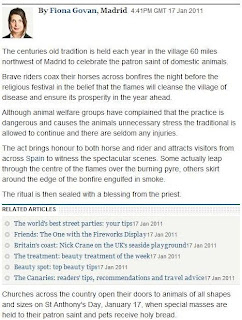 Telegraph original, from Monday
Then, in another piece bearing today’s date, the Daily Express – under the anonymous by-line of “Daily Express reporter” – reports the same event, the title being “Blazing Saddles In Spain”. The content of the Express article appears suspiciously similar to that from the Telegraph – both are shown to illustrate the point. 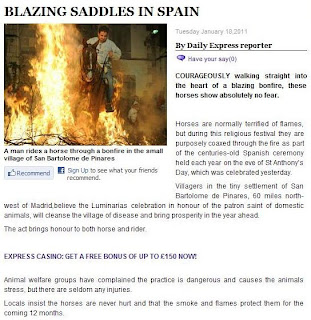 Express, from today (Tuesday)
The news was also carried by the Daily Mail, which, like the Telegraph, shows Monday’s date on its copy. So, Express editor Peter Hill, perhaps you’d like to explain yourself: what’s with this succession of stories appearing one day on other news websites, then the next day on yours?
Posted by Tim Fenton at 12:18