Express – Not Quite Plagiarism

Another day, another story appears in the Daily Express that is remarkably similar to one previously run by another paper. Today’s example is about favourite targets for the right leaning media, Commons Speaker John Bercow and wife Sally: the original piece appeared on the Telegraph site yesterday, is timed at 1151 hours, and is titled “Sally Bercow denounces Tory ‘whispering campaign’ against the Speaker”. 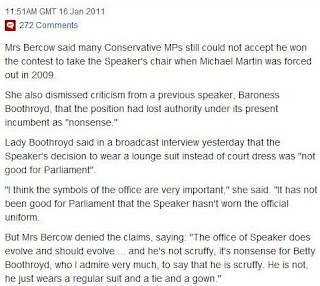 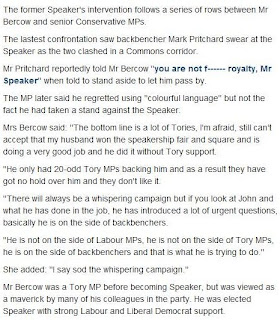 Original from the Telegraph
Over at the Express, their story is dated today, attributed to political editor Macer Hall, and titled “Speaker John Bercow’s wife lashes ‘whispering campaign’”. Most of the quotes in the Express article are identical to those in the Telegraph one, and little of substance is different, barring the Express’ inclusion of snarky detail such as asserting that Bercow’s “authority is crumbling” and that his wife is “a failed Labour council candidate”. 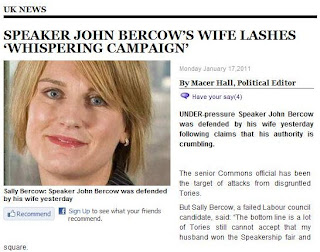 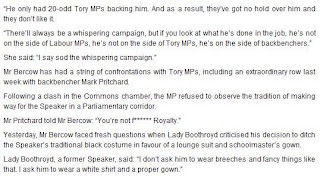 And the Express version

Both articles are included, and I commend them to anyone doubting that cutbacks at the Express have gone so far that the Desmond Press’ increasingly desperate hacks are lifting copy from rival titles in order to fill the pages of their downmarket papers.

Small wonder that circulation at the Daily Express is in freefall: “benchmark of excellence” indeed.
Posted by Tim Fenton at 11:39