Time To Turn Down The Rhetoric

The shooting outside a Safeway supermarket in Tucson, Arizona, yesterday, which has already claimed six lives and has left Rep. Gabrielle Giffords fighting for her life, was not the first recent targeting of a politician in the USA. But it has come in a climate of deepening political division, and increasingly shrill and incendiary rhetoric from some politicians and commentators.

This was acknowledged by Pima County Sheriff Clarence Dupnik at a news conference later in the day. His words merely echo what many have warned about for months now: “The anger, the hatred, the bigotry that goes on in this country is getting to be outrageous ... and unfortunately, Arizona I think has become sort of the capital. We have become the mecca for prejudice and bigotry”.

Actually, the hatred and bigotry has spread well beyond Arizona: I’ve previously told of Byron Williams, who on July 18 last was intercepted on Interstate 580 on his way to kill “people of importance” at the Tides Foundation in San Francisco. Williams had been watching rather a lot of the incendiary ranting of the increasingly wayward Glenn Beck, “star” of Fox News Channel (fair and balanced my arse).

And Beck’s co-host at the “Restoring Honor” rally on the National Mall in Washington DC on August 28 last, Sarah Palin, has not been averse to routine nastiness where her political opponents are concerned: this image shows her campaign against Democrat Representatives in Republican held states who had voted for health care reform. Note that each is marked with the crosshairs of a gun sight, and one of those “targeted” was Rep. Giffords. 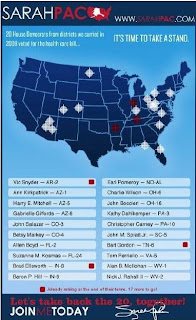 Palin took the image down yesterday after the shooting, but it was too little, and too late. Yesterday’s shootings have thrown into stark relief just what happens when the rhetoric gets cranked up to near-hysterical levels: fortunately, in a special Saturday edition of Countdown, MSNBC host Keith Olbermann struck a more measured tone in a “Special Comment” piece, where he said that it was “time to put the guns down”.
Olbermann is right, but the gallery of rogues he names, together with their apologists in the media, politics and elsewhere, will be busy next week explaining away any suggestion that they contributed to what happened yesterday in Tucson, while blaming others and carrying on as before.

Until the next time.

[UPDATE 1920 hours: Doctors have given an optimistic update on Rep. Gifford's condition. Sheriff Dupnik has once again spoken adversely on the 24/7 anti-Government rhetoric. The suspect, Jared Lee Loughner, may have links to a white supremacist group. I'll blog on this further tomorrow]