State Of The Climate Address

The numbers are in for 2010: the year was one of the warmest ever, and this much is agreed by the Met Office and University of East Anglia Climate Research Unit, the NOAA National Climatic Data Center, and the NASA Goddard Institute for Space Studies.

However, the three bodies do not agree on whether 2010 was the warmest ever, which is interesting, given that some of the antis label all three as part of some great conspiracy. Yes, established science does not agree on every detail, probably because the three organisations are obtaining their data from different sources.

But the variation between the analyses is not great. The Met Office has helpfully ranked the ten warmest years as reported by them, NOAA and NASA, so that a comparison can be made. Note the reference to temperature anomaly: this shows the difference from the long term average. A positive anomaly means the temperature is higher than would have been expected, had readings followed that average. 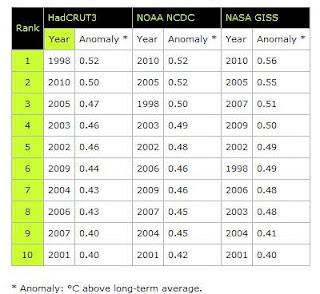 A look at those figures shows that the difference between the three bodies for any particular year are small: 1998, which the Met Office and CRU have as the warmest ever, gives an anomaly of 0.52 Celsius there, versus 0.50 for NOAA and 0.49 for NASA. Last year comes out at 0.50 on Met Office and CRU versus 0.52 for NOAA and 0.56 for NASA. But all three organisations concur on the warmest ten years. 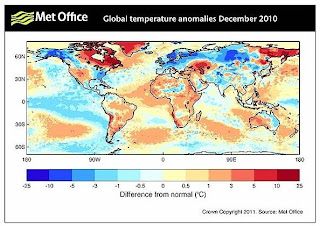 Also included by the Met Office is a global temperature anomaly map for December 2010, which was so cold across the UK. As can be seen, some parts of the earth’s surface were colder than the long term average, while others were warmer: the anomaly varied depending which side of the USA was studied, which part of the Mediterranean coast, or which side of Australia.

Thus the reason that climate change science cannot be easily dismissed by saying “it’s cold therefore there is no global warming”, although it can be predicted with the certainty of night following day that some of the antis will continue to do just that.