Boris Illness And The Giveaways

As Zelo Street told yesterday, not only is alleged Prime Minister Alexander Boris de Pfeffel Johnson seriously ill after becoming infected with the Coronavirus, his spinners have not levelled with We The People about the gravity of his condition. So yesterday came a yet further charade: that he was taking charge from his hospital bed. 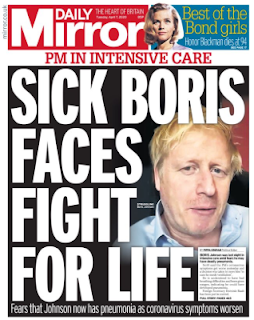 This did not survive the daily Covid-19 briefing, where his designated deputy Dominic Raab let slip that he had not talked to Johnson since Saturday - in other words, before the dash to St Thomas’ Hospital on Sunday evening. And then, as the evening progressed, matters became more serious at Johnson was taken to the Intensive Care Unit.

Once again, there had been a lack of candour: when the Russian media claimed that Johnson had been put on a ventilator, it was angrily dismissed by those “10 Downing Street sources”. By yesterday evening, it was admitted that he had been given oxygen before being moved to the ICU - to be nearer to a … ventilator. 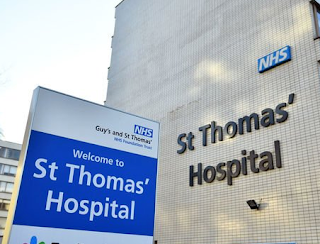 Meanwhile, seemingly unnoticed by her fellow media folk, Sarah “Vain” Vine mused “It increasingly seems that people need to be checked for potential complications around day 6/7 of corona symptoms - apparently that is when those who are likely to have pulmonary problems begin to suffer. Early treatment at this stage is key”. Whoever did she mean?

Johnson had been suffering the effects of Covid-19 for 11 days or so before being whisked off to St Thomas’. But it was during last week, at around that 6 to 7 day mark, that concerns about Johnson’s breathing first reached the press, although it was not until the weekend that the Guardian reported it. Other titles kept schtum.

“Pulmonary problems” means “breathing difficulties”. Then, as the news of Johnson’s transfer to ICU became known, came another giveaway, this time from Iain Duncan Cough, who, in a rare moment of candour, let slip that Johnson was gravely ill.

He told the BBC “I know him very well so I am deeply saddened really that it should come to this. He has obviously tried like mad to try and get through this but it’s not good enough so far … It doesn’t mean that he is not going to pull through this because they may have put him on intensive care because they can treat him and he may have a secondary infection, a serious chest infection and that will stabilise him”. A secondary infection. 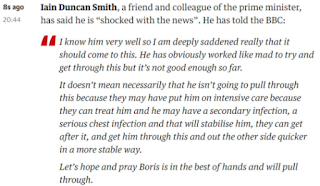 Duncan Cough added “Let’s hope and pray Boris is in the best of hands and will pull through”. It’s not exactly the ringing endorsement of rude health and outright denial of anything more serious that Johnson’s spinners have been putting out. And when you put Duncan Cough’s statement alongside Ms Vine’s thoughts, it looks very, very bad.

So it should surprise no-one that the Mirror has broken ranks with the rest of the press this morning and told its readers “Fears that Johnson now has pneumonia”. Not even the creative spirit of Michael “Oiky” Gove has summoned the courage to deny that.

The reality of the situation is slowly emerging. But we are still being kept in the dark. We hope for the best, but must remain prepared for the worst. So it should surprise no-one that the Mirror has broken ranks with the rest of the press this morning and told its readers “Fears that Johnson now has pneumonia”.

As they've admitted he's on oxygen, he must have.

"Designated deputy" Dominic Raab is a man on record as believing the Peruvian capital Lima is in the Philippines (see Hansard) and that the poor have a "cashflow problem".

Hopefully Johnson will pull through and his own side can then get the knives out in true Tory fashion.

I give support in exact proportion to the "support" Bozo gave to the Bigley family after the murder of Ken Bigley. When Ken's brother advised Bozo to "Get out of public life", though I doubt he meant on the end of a deadly virus.

The terrible irony of it all.