The Hounding Of Tim Farron

There has been no finer example of the hypocrisy exhibited by the right-leaning part of the Fourth Estate than its attitude towards Lib Dem leader Tim Farron. Almost every Christmas, we are told that there is a “War on Christmas”, and that this is another way in which Christianity is “under attack”. Christians, we are told, face increasing discrimination in the workplace. Yet when Farron gets it in the neck, they are silent. 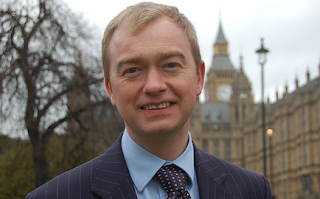 Those who look in regularly on Zelo Street will remember the case of electrician Colin Atkinson - a committed Christian - who worked for Wakefield and District Housing. He broke company rules by fixing a cross to the dashboard of his company van. When this practice was forbidden, the Mail became particularly righteous. Atkinson, they declared, was being “persecuted”. The case sucked in the EDL and BNP.

It is so different with Farron: the Mail has served up articles like that headlined “Churchgoer Michael Gove slams Tim Farron for hiding behind his faith after the Lib Dem leader fails AGAIN to say gay sex is not a sin”. “Churchgoer”. It’s an activity that I never noticed in the scribblings of Gove’s wife Sarah “vain” Vine. But it is a way for the Mail to reinforce its call to Vote Tory by bashing the opposition.

And the Lib Dems may well prove to be stern opposition to the Tories in several seats around the UK. But, you might wonder, why shouldn’t Farron be held to account for his personal views, given he is in the public eye, the leader of a still significant political party? And, as Jon Stewart might have said, two things here. One, by their actions shall you know them. Farron’s voting record on gay rights is as liberal as his chosen party.

And two, if we’re talking Christians, who claim that their faith informs their actions and outlook on the world, why is Theresa May not being quizzed to the same degree? Does she think that gay sex is sinful? Why is it only Farron who has to be summoned to reveal his thought processes to the Tory-supporting press? And why can’t our free and fearless press see that their behaviour is, once more, partisan to the point of absurdity? 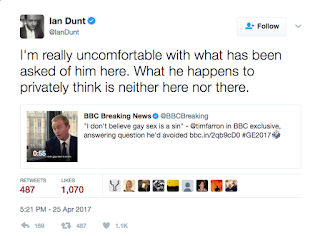 On top of that, as Ian Dunt has mused, “I'm really uncomfortable with what has been asked of him here. What he happens to privately think is neither here nor there … His voting record is solid. He recognises the distinction between his private faith and personal freedom in society”. The press is constantly frightening its readers about the “thought police”, but in their world, this is a solely left-wing threat, not one that they pose.

So yet again, papers like the Mail and Sun are guilty of rank hypocrisy (the Mail’s recent attack on the “thought police” featured, you guessed it, Michael Gove). They aren’t interested in Farron’s actions, merely in prising his thoughts out of him. But as these are not organs of the state, it can’t be at all like something out of Nineteen Eighty-Four, oh no.

The attacks on Tim Farron encapsulate the right-wing press’ hypocrisy. They would scream blue murder if the rotten lefties tried that on with anyone on the right. But because it’s the bloke who leads the Lib Dems, and they could give the Tories a hard time, then it’s open season. Pass the sick bucket.
Posted by Tim Fenton at 10:29

Isn't "Churchgoer" used to imply that as Gove actually goes to chruch then he is a "proper" Christian, while Farron, doesn't so therefore somehow isn't a "real" Christian.

Of course the press are not just being hypercritical with the people in this story but with the subject as well. If anyone else - especially a Tory - had said, or implied what Farron did, then they'd be agreeing with him.

"Farron’s voting record on gay rights is as liberal as his chosen party."

That's just not true. He voted against the Equality Act (Sexual Orientation) and was absent for the vote on the third reading of the Marriage (same Sex Couples) Bill.

The only positive outcome of this hypocritical exercise is that it demonstrates a crucial element of Liberalism: that what a person does is more important than what they think.

It doesn't really matter what someone thinks about Group X behind closed doors as long as they aren't causing harm or discrimination to Group X in the outside world.

Tim Farron passes that test, as his voting record demonstrates. And as a semi-militant Atheist, I find myself appreciating his separation of personal life and public duty.

If only pick 'n mix 'Christians' like Nadine Dorries could be publicly challenged in anything remotely resembling the pile-in on Tim Farron.

A non-story blown out of all proportion. Irrelevant compared to the bigger issues at stake in the election campaign, yet was a feature item on the Beeb's 10pm news last night; I think the Middle East human organ trafficking scandal got less airtime than the Farron piece.

Anyone raised May's record on the subject?

For some time now I have been getting increasingly angry at the media's treatment - well, 'hounding' is a better phrase - of Farron, whilst ignoring the 'faith' of people like May. I doubt we will see that anomaly redressed any time soon though. It's good that Farron rightly separates his private and public lives, but I suspect that still won't be enough for the BBC and the usual suspects.

"He voted against the Equality Act (Sexual Orientation) and was absent for the vote on the third reading of the Marriage (same Sex Couples) Bill."

The truth doesn't agree with you:

Source: An Open Letter On The Subject of Tim Farron's "Homophobia":
http://www.huffingtonpost.co.uk/jennie-rigg/tim-farron-lgbt-record_b_16095906.html

Ummm the actual truth (not HuffPo lol) disagrees with you. Have a look at theyworkforyou.com

On 21 May 2013:
Tim Farron was absent for a vote on Marriage (Same Sex Couples) Bill — Third Reading

I never said why he voted how he did. People can make up their own minds.

Bit of a jump to turn being absent for a vote into being an opponent of that Bill.

Plus, this was one out of five items on that TheyWorkForYou site - three of which show him in favour of equal gay rights.

The intellectual somersaults some people perform to make a partisan point, eh?

I'm not the one performing somersaults - Tim said Farron’s voting record on gay rights is as liberal as his chosen party - that's objectively false as I've shown.

I actually agree with the rest of the post and wouldn't have brought up Farron's voting record had Tim not performed an intellectual somersault of his own.

If Tim Fenton's statement on Farron's voting record is 'objectively false' then we wouldn't have a statement from the chair of Lib Dem LBGT+ giving him her full and unconditional backing, would we?

Tim Farron has an absolutely excellent voting record on gay rights in Parliament, an objective fact, rather than the opposite which certainly isn't. Teresa May has one of the worst. Why is Farron being asked about gay rights on this issue and not Teresa May? Disgraceful.

Many out here believe that Brexit can and must be stopped/overturned.

All remain-minded MPs bottled it over Article 50.

Labour/Corbyn has sold us down the river and won't take a stance.

Anyone other elected representatives prepared to fight for overturning Brexit.

Quick, look over there!

This non-militant atheist has always been of the belief that the point is we're all sinners and that the power of forgiveness is paramount. It's that easy to reconcile bit that I'm certain Tim has no problem with but the rest of the twats do.