One might have thought that the last comparison that the current régime at the Daily Mail would want is with the paper’s infamous fawning over the far-right in the 1930s, led by then owner the first Viscount Rothermere. Then, the paper cheered not only for Oswald Mosley and the British Union of Fascists, but also the Nazis. Rothermere had a high regard for Adolf Hitler. His paper faithfully recorded the achievements of the Third Reich. 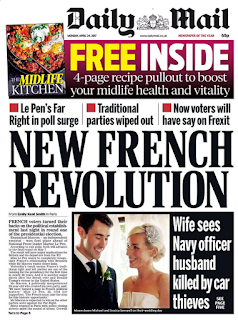 All that, of course, is no more: now the Mail would not dream of fawning over the far-right in Germany. Instead, the legendarily foul mouthed Paul Dacre and his obedient hackery are fawning over the far-right in France, desperately talking up the Presidential candidacy of Marine le Pen from the Front National as their last hope of seeing another EU member state follow Britain through the exit door. Hence today’s front page splash.

“Le Pen’s Far Right in poll surge … Traditional parties wiped out … Now voters will have say on Frexit … NEW FRENCH REVOLUTION” screams the headline, written in all probability by Ron Hopeful. No mention that Ms le Pen’s poll ratings had been in decline for some weeks prior to the election. No mention that she did not win the first round poll. No mention that the second round favourite is a pro-EU, pro-Euro candidate.

Only in the small print to readers discover that the first round of voting - to decide who goes forward into the run-off in two weeks’ time - was won by Emmanuel Macron, a centrist who is now projected to win more than 60% of that vote and not only finish off the hopes of Marine le Pen, but also the hopes and dreams of Paul Dacre.

Why should this be? Ah well. The Mail has been searching, wishing and hoping ever since last year’s UK referendum on EU membership that another member state would follow us down the same path. The Vagina Monologue could then tell the paper’s readers that all those naysayers were wrong, that the EU really was bust, that the idea of sovereign nations exercising their freedom was a real thing, and not just Northcliffe House hot air. 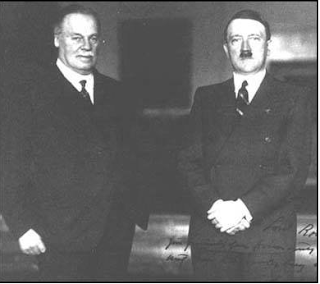 But it’s all gone wrong since then: the Austrian Presidency, which the Mail told its readers would go to a far-right candidate, went instead to Alexander van der Bellen of the Greens. In any case, there would not have been a referendum on EU membership there, even if the far-right had won. So the Mail turned its attention to the Netherlands, and talked up the viciously racist Geert Wilders. There would, the paper claimed, be a Nexit next.

Wilders’ poll ratings faded before the vote. There was no Nexit. So now the Mail is left with France as its last hope (the German elections later this year are unlikely to see any significant advance for anti-EU parties). Hence Robert Hardman proclaiming “Marine Le Pen was proclaimed last night as the country’s greatest heroine since Joan of Arc”, and a Mail Online puff piece titled “How Marine Le Pen turned her Holocaust-denying father's toxic National Front party into a mainstream election-winning force”.

This is no more than false hope and projection: Paul Dacre is so desperate not to be shown up as the purveyor of a false and misleading narrative that he is even prepared to return the Daily Mail to fawning support of the far-right. But Marine le Pen isn’t going to win, there isn’t going to be a Frexit, and the EU isn’t going to disintegrate.

Paul Dacre has sold his readers a pup. They may be unhappy when they find out.
Posted by Tim Fenton at 10:43

Fingers crossed. But after the totally irrational Brexit and Trump victories, I wouldn't rule out a Le Pen win.

It would be interesting to know what the Irish Daily Mail's position on "Irexit" is. I don't read the rag myself, but I am closely related to people who do, so I may have to start doing some research

It may be a case of Left Hand not necessarily copying Right Hand: FWIW, when Jan Moir wrote her despicable hatchet job on the just-deceased Stephen Gately, it wasn't published in the Irish edition. Instead there was a big splash on his funeral, with plenty of photos of distraught fans. Not a puff-piece, as such, but certainly more sympathetic.

The Mail can whoop and cheer for Le Pan and remind us about Trump and Brexit.

Those with decent memories will recall that the Mail whooped and cheered for Hofer in Austria and Wilders in the Netherlands.
My money is on Le Pen joining the Hofer-Wilders axis of failure.

It's a great shame that the Alt-Right shenanigans are restricted to the Anglo-Saxon world.