ITV, as is customary on Bank Holiday weekends, dug out one of the early Bond films yesterday: this year it was the turn of Thunderball, filmed over half a century ago, mainly in the Bahamas. But the Murdoch goons at the Sun appeared to have been watching an even earlier film in the series, Dr No, the first ever 007 outing, when they dreamed up the fairytale that has adorned the paper’s front page today. 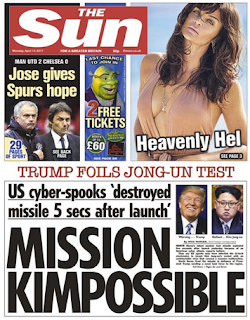 The premise of that film was that the eponymous villain was using his nuclear facility on a remote Caribbean island to “topple” American rockets launched from Cape Canaveral; the toppling attempt foiled by Bond was to have been of a Project Mercury launch. The Sun has merely updated this hokum to tell readers “Trump Foils Jong-Un Test … US cyber-spooks ‘destroyed missile 5 secs after launch’ … MISSION KIMPOSSIBLE”.

So the Murdoch goons get to cheerlead for Combover Crybaby Donald Trump - now one of Creepy Uncle Rupe’s bestest pals - while inventing yet another complete pack of lies with which to con the readers. The idea that the Yanks got the latest North Korean missile test to self-destruct, rather than it being another failure in a long series of hit-and-miss launches, is so far-fetched it would not nowadays get into a Bond flick.

The headline of the supporting article tells you all you need to know: “North Korea’s embarrassing missile launch failure may have been caused by US cyber attack as Donald Trump warns his military may ‘have no choice’ to strike the rogue nation”. Only “may have been caused”. Try again. “US agents may have infected the hi-tech electronics in Kim Jong-un’s rocket as Korean scientists fear tyrant's wrath”. Only “may have infected”. 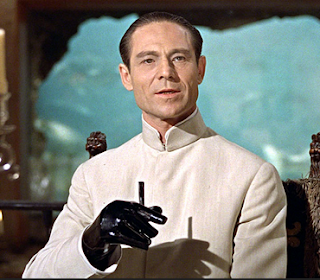 Not so fast, Meester Tony Gallagher

And who are these “experts” of whom the Murdoch clowns speak? Just one “expert”, actually: “Defence analyst Paul Beaver said: ‘It is perfectly feasible the US brought down this missile’”. Really? Is Paul Beaver an electronics and rocketry expert? Not according to his CV he isn’t: Beaver is a pundit and war history enthusiast, a former Territorial Army soldier, and one of the original signatories to the hard-right Henry Jackson Society.

Moreover, while Beaver gushes “North Korea has had a string of launch failures and it may be no coincidence that they have happened as the US went to cyber war”, former Foreign Secretary Malcolm Rifkind has countered “It could have failed because the system is not competent enough to make it work … There have also been quite a number of occasions when North Korean tests have failed … But don’t get too excited, they’ve also had quite a lot of successful tests”. Just like other countries developing such weapons.

And the Sun’s go-to Real Soldier (tm) Richard Kemp has effectively poured cold water on the whole story, telling “I DON’T think this will amount to anything at all … The Americans are not interested in conflict with [North Korea], so they will not initiate anything”. So the paper’s own military expert says the whole idea is a crock of crap.

Still, spending all that time buried in the box-set of Bond DVDs didn’t go totally to waste. Pity the resulting story is even more far-fetched, though.
Posted by Tim Fenton at 09:58

Why does the Sun make up these stories when Noel Edmonds could tell them that the reality is so much simpler. Trump has on his staff a team of practitioners of Noel's famous 'Cosmic Ordering'. This secretive group blew up the missile simply by 'visualisation'. Listen to this expert:

'Cosmic Ordering is the process of identifying something you want or need in your life and then simply placing the order with the cosmos by asking for it. Visualize what it is you want, lightly holding that request in your mind without worry or attachment to the outcome, and then releasing it to the cosmos.'

A message on my sub-ether handset states that Kim Jong-un used the Cosmic Ordering site without reading the warning: "Placing hateful, negative or vengeful orders are likely to backfire."
Setting fire to your pants whilst repeating a mantra to Durga is more effective.

What I don't understand about this whole saga is that we are told Kim Jong-un is not to be trusted with nuclear weapons but somehow Trump is? And what gives America/the West the right to go around telling others what weapons they are or aren't allowed?

Still, all that really matters is that the dear readers of the tabloids are kept angry and afraid.