After the cruise missile attack on that Syrian airbase last week, where a US warship loosed off 59 of the things, only to do so little damage that the Syrian Air Force was operating out of the base later the same day, very few pundits noticed that the Shock and Awe was for media consumption only. The administration of Combover Crybaby Donald Trump basked in the glory of conning the press and broadcasters. Then reality returned. 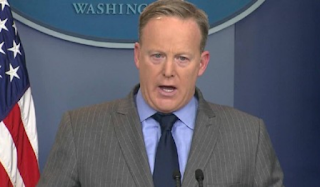 Russian interference and surveillance stories have returned to bedevil the Trump White House. And then came the car crash of ad-libbed idiocy that is Sean Spicer.

Spicer is, for reasons best known to those who appointed him, the White House Press Secretary. He is the one who turns up to take press briefings on behalf of the Trump Gang, which he handles, or perhaps that should be mishandles, in his own inimitable manner. Some call it combative. Others see it for what it is - bluster and bombast masquerading as authority. And yesterday came the moment of truth for this buffoon.

Those who thought that Ken Livingstone behaved like an idiot when he kept banging on about Hitler now know that was a mere warm-up act: Sean Spicer did it properly, turning up with his shovel and keeping on digging. The timeline is barely believable.

Trying to demonise Bashar al-Assad, Spicer began “We didn’t use chemical weapons in world war two. You had someone as despicable as Hitler who didn’t even sink to using chemical weapons”. Er, hello? What did the Nazis use to gas all those prisoners, then?

He tried again. “I think when you come to sarin gas, he was not using the gas on his own people the same way that Assad is doing”. Jews were not “his own people”, then. 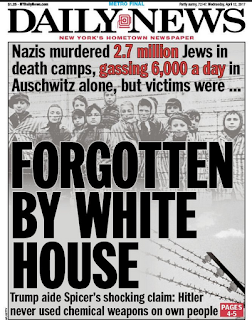 Could it get worse? It certainly could. “Thank you, I appreciate that. There was not in the – he brought them into the Holocaust centres - I understand that. But I’m saying in the way that Assad used them, where he went into towns, dropped them down into the middle of towns … So, the use of it, I appreciate the clarification. That was not the intent”.

He even reimagined concentration camps - death camps, as they all too often were - as “Holocaust Centres”. The Guardian observed “More than 6 million Jews were murdered, along with large numbers of Gypsies, gay people, political dissidents and others, during the Holocaust. Many were killed in gas chambers with chemical gas agents such as Zyklon B. It is unclear if Spicer’s reference to ‘Holocaust centres’ was to the gas chambers or to concentration camps or something else”. And there was one more twist.

“The statement came on the first day of Passover, the Jewish holiday which commemorates the liberation of the Jewish people from slavery in Egypt. The holiday is one of the holiest days in Judaism and has been used a metaphor for the oppression that Jews faced throughout history, including under Nazi Germany”.

Sean Spicer certainly chose his moment. Whether he chose wisely is another matter.
Posted by Tim Fenton at 12:29

His comments on Ivanka were interesting.

Showing, once again how putting an attractive woman in the mix has the usual effect of making people like him drool over her comments - in a defence kind of way, of course!

Dribble on guys.Try not to trip over your tongues.

Not everyone thinks Ken Livingstone is an idiot. Perhaps those who do didn't really apprecaite wht he said and the context in which he said it.

Here's a defence of him:

"Quoting historical facts can hardly be anti-Semitic, which is presumably why the Labour Party didn’t even charge Livingstone with it"

Jonathan Rosenhead is Emeritus Professor of Operational Research at the London School of Economics. He is chair of the British Committee for the Universities of Palestine, and Vice-Chair of Free Speech on Israel.

and a letter to The Guardian, signed by many people:

Those who call for a new disciplinary hearing simply because they didn’t like the conclusions of the previous one, demonstrate their contempt for democracy and due process.

A year ago Livingstone, responding to a question from Vanessa Feltz on BBC Radio London, said: ‘Let’s remember when Hitler won his election in 1932, his policy then was that Jews should be moved to Israel. He was supporting Zionism.’

There is nothing whatsoever anti-Semitic about this. Francis Nicosia, the Raul Hilberg Professor of Holocaust Studies at Vermont University wrote in his book Zionism and Anti-Semitism in Nazi Germany (p. 79) that:

‘Throughout the 1930s, as part of the regime’s determination to force Jews to leave Germany, there was almost unanimous support in German government and Nazi party circles for promoting Zionism among German Jews’ Is telling the truth also anti-Semitic?

As Donald Trump and his supporters demonstrate, support for Zionism can go hand in hand with anti-Semitism.

What the campaign against Livingstone is really about is his long-standing support for the Palestinians and his opposition to Zionism and the policies of the Israeli state.

Also... while chemical weapons might not have been used in WWII, they were used in Vietnam with agent orange and Napalm. The affects of which are still being felt to this day with birth defects.

Anonymous #2 - You might want to take a look at Mein Kampf to see what Hitler actually thought about Zionism and the establishment of a Jewish state. Just in case your Google skills are not up to the job:

"While the Zionists try to make the rest of the World believe that the national consciousness of the Jew finds its satisfaction in the creation of a Palestinian state, the Jews again slyly dupe the dumb Goyim. It doesn’t even enter their heads to build up a Jewish state in Palestine for the purpose of living there; all they want is a central organisation for their international world swindler, endowed with its own sovereign rights and removed from the intervention of other states: a haven for convicted scoundrels and a university for budding crooks."

I suggest you take that up with the eminent people whose views I have posted links to above. I'm assuming you can argue a case without resorting again to base insult, though so far I'm unconvinced.

I do hope you're not quoting Hitler as you're a fan of his work. Hard to know.

Worse than the crassness and insensitivity is the "thinking" behind it, that Assad is worse than Hitler.

Has Assad industrially killed millions?
Has he invaded anywhere? (Yes, there was the Lebanon but it hardly equals what Adolf did).
Has he launched a world war... or do we leave that to our Saudi, Qatari and Bahraini and Turkish "allies".

Assad is unpleasant but no worse than Saddam Hussein, who is now sorely missed by the Christians and other minorities who are facing the full force of extremism.

The signs were always there in Drumpf, such as his pointless denunciation of Iran, who are bad but no worse than the Sunni regimes Bush, Obama and now Drumpf have continued to support. So why anyone imagined he'd be better than the neocons is a mystery.

We should denounce Sean Spicer for his stupidity and crassness but never forget, the underlying "thinking" is expressed by ostensibly more "respectable" people like Mike Pence and is just as bad even if more subtly camouflaged.

The priority is to denounce the Republicans in their entirety, from the "libertarians" to the neocons to the "alt-right" Nazis, and to slag off this particular expression but not let him be offered as a scapegot and let the others off.

Published in Guardian Letters 12th April 2017; 533 people have signed this.
'We reject the call for Labour to expel Ken Livingstone'L