The art of defection has been practised by many over the years, but almost always those defecting know they cannot credibly return: Winston Churchill remains the only one to have successfully busted David Lloyd George’s dictum “A man can rat, but he cannot re-rat”. So it was with former Tory MP Mark Reckless, who like his pal Douglas “Kamikaze” Carswell, has left UKIP, but will not be rejoining the Tories. 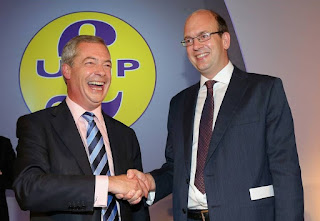 Reckless, who won a by-election in the Rochester and Strood constituency as a Kipper before being sent packing in 2015 by the Tories’ Kelly Tolhurst, had been elected to the Welsh Assembly Government. Like his fellow Kippers, Reckless had been elected via the list system which uses the d’Hondt method to supplement those elected via the constituency poll and give an approximately proportional result.

But there have been problems with the UKIP rabble ever since that electoral success: Reckless is not the first to throw in the towel, after Nathan Gill was ousted as leader of UKIP in Wales by Neil “A Liar And A Cheat” Hamilton. Reckless, who wrote the party’s 2016 Welsh manifesto, finally decided that after Carswell had turned his back on UKIP, he would follow suit. His resignation letter is remarkably similar.

Like Gill, he will sit as an independent AM, and despite the Kippers calling for him to go and make way for the next UKIP list candidate, as the BBC has confirmed, “There is no rule that would require Mr Reckless to give up his seat and give way to the next UKIP candidate on the regional list”. Reckless will vote with the Tories, but like Carswell he will not rejoin them. The reaction has been utterly predictable.

Former party Oberscheissenführer Nigel “Thirsty” Farage whined “To be elected on a list and then to resign from the party is a dishonourable thing to do, and I thought better of him”. But Farage has his hands full with his burgeoning rent-a-gob media career - as well as all those UKIP expense problems in the European Parliament.

Former party donor and current spiv Arron Banks “claimed the defections of both Mr Reckless and Mr Carswell had been coordinated by the Conservative MEP and chief Brexiteer Daniel Hannan”. This, as so often with Banks, comes with no evidence to back it up, and in any case, he’s no longer got an interest in UKIP, has he?

Farage echoed the mood of paranoia: “[he] suggested pressure may have been put on Mr Reckless by Carswell … ‘He is clearly close to Douglas Carswell, I guess some kind of pressure's been put on him’”. But all this is pointless speculation. What is happening is that UKIP’s rabble in Wales, with the deeply unpleasant Hamilton in charge, is alienating even its own representatives. And with the referendum won, some are drifting away.

On top of that is all the money the UKIP group in the EP has to repay - around £150,000 of it - and the continuing EU fraud investigation into several UKIP MEPs including Farage and their current leader Paul Nuttall, the “Bad Bootle Meff”. While Farage rants about Reckless, all he is doing is raging at the dying of this particular light.

UKIP is becoming an irrelevance. If only that had happened rather earlier.
Posted by Tim Fenton at 10:08

Ukip: up to their necks in their own defecations.

One small correction: Reckless was not elected to the 'Welsh Assembly Government', but to the National Assembly for (sic) Wales. The actual 'government' is currently made up of Labour and the Assembly's solitary LibDem (who - in typical LD style - was bought by the offer of a minsterial job).

The KIPpers are in deep schtuck all round: not only have they lost Gill and now Reckless, but their northern AM Michelle Brown could be kicked out of the party as well: http://www.bbc.co.uk/news/uk-wales-politics-39473382.

On top of this, they seem able to field only 80 candidates across Wales in the upcoming council elections: http://www.bbc.co.uk/news/uk-wales-politics-39506347.

"I thought better of him" Was this thought based on anything then?