Some musicians are also campaigners. This is part of their appeal; their views chime with many of their fans, and often those who don’t share those views are prepared to put their own ones aside because they enjoy the music. And some other musicians have views which are way out of kilter with their fan base, but here common sense usually prevails. 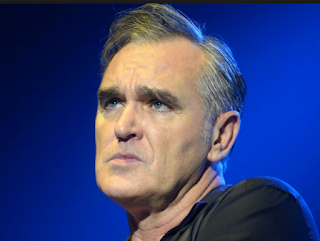 If the musician has secret far-right sympathies, it’s sensible to keep schtum. But this level of common sense has not been allowed to enter the thoughts of former Smiths front man Morrissey, whose status has taken a nosedive of late.

After he said “Finally I have hope … I despise racism. I despise fascism. I would do anything for my Muslim friends, and I know they would do anything for me. In view of this, there is only one British political party that can safeguard our security. That party is For Britain … For Britain is the bulldog breed that will never surrender” the writing was on the wall. For Britain is an Islamophobic rump. The backlash came swiftly.

DJ and writer Dave Haslam “announced he was throwing a ‘positive protest party’ against Morrissey on 8 July, to coincide with the second of two gigs he is playing in Manchester. Fans, former fans and non-fans are all welcome. The free party, from 3pm until midnight and titled One Nation Under a Groove, is billed as a response to the former Smiths frontman’s ‘divisive views, and his support for the far right’”. 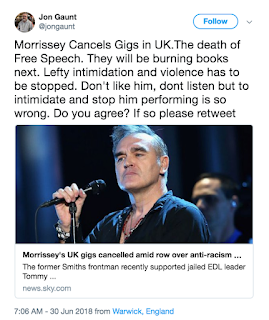 This should have come as no surprise: Morrissey has also declared “I don’t really think, for instance, black people and white people will ever really get on or like each other” and “You can’t help but feel that the Chinese people are a subspecies”. He recently declared his support for Stephen Yaxley Lennon, who styles himself Tommy Robinson. 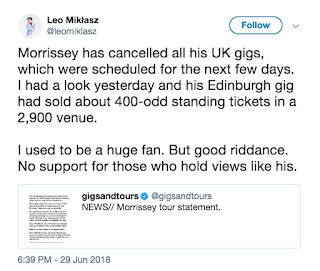 And now has come the news that “Morrissey has postponed all his UK and European tour dates in July, his management has said … A statement from representatives of the former Smiths frontman said concerts in the UK, Germany and Sweden had been postponed ‘due to logistical circumstances’ beyond their control, but promised to reschedule the events”.

Yeah, right. After rent-a-rant Jon Gaunt frothed “Morrissey Cancels Gigs in UK.The death of Free Speech. They will be burning books next. Lefty intimidation and violence has to be stopped. Don't like him, dont listen but to intimidate and stop him performing is so wrong” - there hasn’t been any intimidation - Leo Miklasz had a better reason for the cancellation.

“Morrissey has cancelled all his UK gigs, which were scheduled for the next few days. I had a look yesterday and his Edinburgh gig had sold about 400-odd standing tickets in a 2,900 venue”. The fans had walked away. Simple as that.

All that was left was the ridicule. “Remember when lefties loved Morrissey and thought Danny Dyer was crass?” … “There's a rumour that Morrissey has had to cancel his tour as he's going to do the obligatory fortnight stint of leading UKIP followed by taking the helm of Britain First while the last two members are in jail” … “I wonder if he'll turn up at the planned Justice For Tommy whinge-fest scheduled for the 14th [July]” were typical. 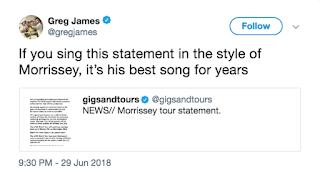 And as Greg James said of the cancellation notice, “If you sing this statement in the style of Morrissey, it’s his best song for years”. Cruel. Cruel but fair.
Posted by Tim Fenton at 12:40

Morrissey has never been taken seriously here in Manchester, his bizzare statements recently rather underline the concerns from psychiatrists that Morrissey has lost the plot.

Defend free speech! Dragoon people from the street to listen to this charming man. Nobody should be allowed to simply not turn up.

I knew he was deaf but to be blind to society's problems as well, what more can be said?