The career of former Liberal Party leader Jeremy Thorpe, and its decline following revelations about his private life and subsequent trial for conspiracy to murder Norman Scott, a former model, is being reappraised following a BBC miniseries which concludes this evening. Much has been said about the Thorpe case. But one player in the whole saga has thus far had no more than an occasional mention. 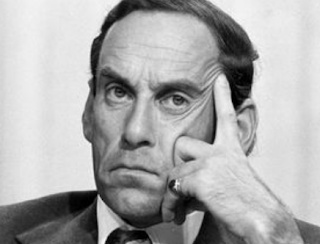 During his discussion for The Andy Marr Show (tm), Hugh Grant, who plays Thorpe in the BBC production, mentioned the attention given to the case by Private Eye magazine. To many observers at the time, this was key to many outsiders’ attitudes to what happened: the Eye did not have the reach it has today, but after the deeply unpleasant James Goldsmith attempted to close it down during the late 70s, it enjoyed considerable notoriety. 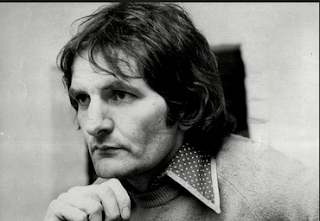 Also, the Eye’s then editor Richard Ingrams was virulently homophobic; this tendency was to ultimately show that the world had moved on rather more rapidly that the UK’s premier satirical magazine suggested. As early as 1964, an Eye front cover recording the first Wilson Government asked “HOW MANY POOVES ARE THERE IN WILSON’S GOVERNMENT?” At the time, homosexuality was illegal in the UK. 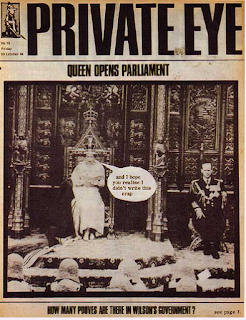 Even after the decriminalisation of homosexuality, the Eye was routinely rude and dismissive towards gays, even those who were regular contributors to the magazine. Labour MP Tom Driberg, who for many years contributed the crossword under the pseudonym Tiresias, was referred to as “Tom Gayberg”. 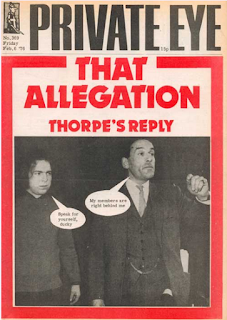 So it should have surprised no-one that the magazine’s response to the Thorpe allegations was on the same level. The cover of issue 369, with Thorpe saying “My members are right behind me” and the response “Speak for yourself, ducky” was typical. 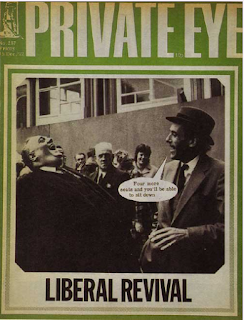 Then the Eye began to attract criticism for its blatant homophobia. When the photo which had first been used when Cyril Smith won a by-election in 1972 - Thorpe allegedly telling him “Four more seats and you’ll be able to sit down” - was re-used later, Ingrams overreached himself. He may have been taken aback at the criticism. 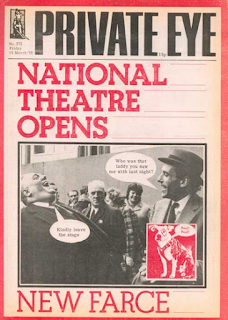 This time, Thorpe is saying “Who was that laddie you saw me with last night?” to which Smith is replying “Kindly leave the stage”, which is laboured enough, but might not have generated so much adverse comment, had Ingrams not added a large and unsubtle insert of a pantomime dog barking “Poof! Poof!” 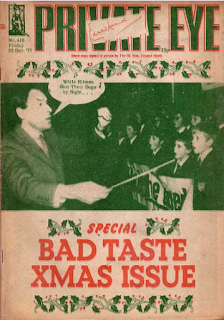 There was more than the usual cancelling of subscriptions after that one, but no let-up in the Eye’s assault on Thorpe. We knew that Norman Scott’s great dane was called Rinka mainly because the Eye told us of “Rinkagate”. That bungling hitman Andrew Newton (the Eye mockingly nicknamed him “Gino”) had shot Rinka, then failed to shoot Scott, was alluded to in another Eye front cover in December 1977, imagining Thorpe conducting a Christmas carol service and singing “Where hitmen shot their dogs by night”. 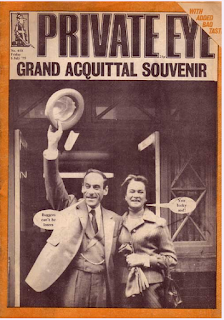 Bad taste Xmas issue, indeed. Perhaps the backlash from Issue 372 had an effect: when Thorpe was acquitted in 1979, Ingrams was in typical gay-bashing form, but the word balloons had become so small as to be positively discreet. Having warned readers that issue 458 was brought to them “With Added Bad Taste”. Thorpe is imagined telling “Buggers can’t be losers” with his wife Marion telling him “You lucky sod!”. 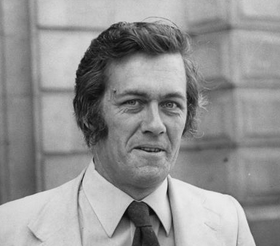 Of course, by that time, Thorpe’s Parliamentary career was over; he lost his seat at the 1979 General Election. Private Eye was there too; long-time contributor Auberon Waugh, a resident of the North Devon constituency, stood against him for the Dog Lover’s Party.

But the most bizarre twist in the whole Thorpe and Private Eye saga was a last allegation aimed at Norman Scott, which concerned the infamous Gala Affair perfume advert. 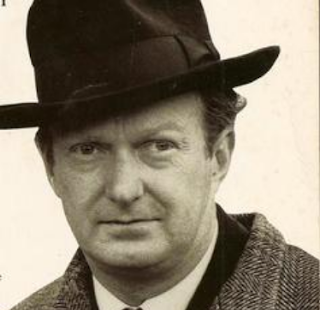 The ad-men had tried to produce an edgy, even racy image to sell the fragrance. They brought in Jean Shrimpton, showing the model standing in the doorway, with a naked man behind her facing away from the camera. “When you mean it, wear Gala Affair” proclaimed the ad. One word balloon later, and the Eye had finished its credibility. 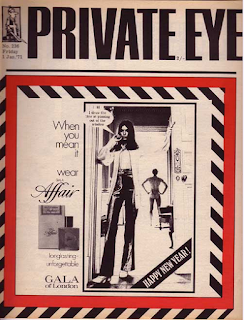 It had Ms Shrimpton saying “I draw the line at pissing out of the window”, and graced the New Year 1971 issue of the magazine. But during the Thorpe imbroglio, it was alleged that the man whose naked rear is clearly visible in the photo was none other than Scott.

Even then, though, the Ingrams homophobia was never far below the surface: the reference to Scott included the claim that he was a “loony poove”.

Attitudes have moved on in the last half-century. So has Private Eye. But the two can still be seen, frozen in a 1970s where homosexuality may have no longer been illegal, but attitudes towards it had changed all too slowly.

Waugh, an appalling reactionary figure, of course was also party to promoting the absurd nonsense that Harold Wilson(!) was a "Soviet agent".

Which turned out to be the schtick manufactured by the crackpot paranoid James Jesus Angleton and his equally loony gang of fascists at the CIA in Langley. And spread by others hired in corrupt media on both sides of the Atlantic.

There is more to this than, er, meets the Eye.

Attitudes may have changed. But not by that much......

Sorry, I don't understand what you mean here:

"One word balloon later, and the Eye had finished its credibility.

Seems like quite a good joke to me. It is aimed at the stupid advert and is the reader has no way of knowing it has anything to do with Scott.