After yesterday’s announcement from Airbus that a no-deal Brexit would likely see the firm leave the UK, the panic button was duly pressed by Brexiteers in Parliament and the press. EU-hating MPs claimed that companies were being egged on by those rotten Remainers, ahead of a cabinet meeting on future customs arrangements. And our free and fearless press rushed to stiffen the resolve of wavering voters. 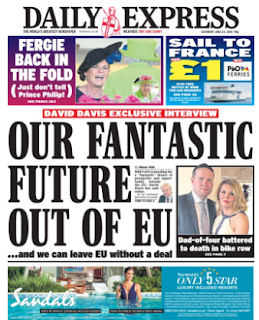 So it was that the joke newspaper that is the Express told readers of “OUR FANTASTIC FUTURE OUT OF EU … and we can leave EU without a deal”, having secured an interview with David Davis, who may have been sober at the time. Meanwhile, the Murdoch Sun’s non-bullying political editor Tom Newton Dunn had been taking dictation from London’s formerly very occasional Mayor Alexander Boris de Pfeffel Johnson. 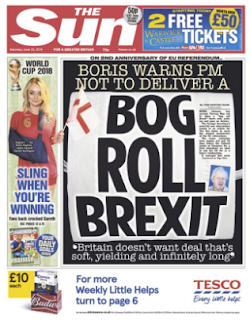 Bozza had warned Theresa May not to deliver a “BOG ROLL BREXIT”, and instead commanded that we should instead have a “Full British Brexit”, another utterly meaningless soundbite that does nothing to counter the gathering gloom, which was hinted at by the i paper telling “BMW joins Airbus in Brexit jobs warning”. 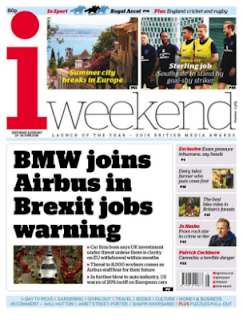 And that is what the press cannot stop its readers hearing: firms lining up to follow Airbus in telling the hapless Tories that if they don’t stop screwing around, there will be job losses, and tens of thousands of them. Yesterday it was Airbus, employing 14,000 directly in the UK, with 110,000 more jobs dependent on the company.

Then came BMW, which manufactures Rolls-Royce cars here, but mainly is the custodian of the Mini marque. As the BBC has reported, “BMW UK boss Ian Robertson says clarity is needed by the end of the summer. BMW makes the Mini and Rolls Royce and employs about 8,000 people in the UK”. Plus more jobs dependent on BMW.

Airbus flying off into a sunset not near the UK ...

Could it get worse? It certainly could. “The UK should should remain in the customs union after Brexit unless there is a proper alternative, the boss of Siemens UK has said. Jürgen Maier … told Reuters a ‘no deal’ scenario ‘doesn't look very good’”. Siemens employs 15,000 people in the UK. And there was yet worse news.

As the FT has told, “John Neill, chief executive of Unipart, a car parts supplier that employs 6,000 people in Britain, said frictionless supply chains were crucial for all businesses in the UK … [adding] ‘The implications for the British economy [of a “no deal” Brexit] are very, very severe and could result in busloads of jobs disappearing into Europe’”. See that? Another 6,000 jobs at risk. 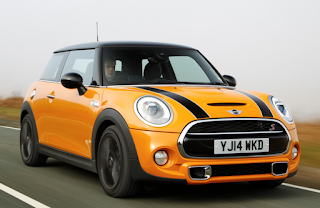 ... Mini heading off to mainland Europe

Plus the bad news wasn’t over. “Tom Crotty, group director at Ineos, the giant petrochemicals group, said several companies were putting investment decisions on hold because of Brexit uncertainty: ‘The government is relatively paralysed … it is not good for the country.’” Ineos employs around 18,500 people.

All of those organisations support tens of thousands more jobs in local economies around the UK - companies which don’t trade with the EU, but … you figure it out.

The Brexit enthusiasts promised us the earth. Now that everyone can see they lied, it may already be too late. The new Guilty Men have made their mark.
Posted by Tim Fenton at 09:44

But the press modestly claims that it does not mould the views of its readers, it merely follows them.
That's why you never see advertisements in newspapers, because newspapers find it impossible to influence their readers.

I wonder why Brexiters think Airbus etc are planning something not in their own commercial interest?