Rupe’s downmarket troops at the Super Soaraway Currant Bun need no encouragement to pour scorn and ridicule on the Labour leadership contest. They are truly self-starters when it comes to laying into the party. And sometimes they are so eager to put the boot in that ideas such as factual accuracy and background research are abandoned altogether. One such prime example has been duly excreted today. 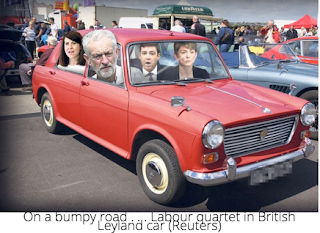 Not a British Leyland car, but hey ho

Under the by-line of deputy political editor Steve Hawkes, a title which suggests he should have known better, readers are told “CORBYN WILL LEY US LOW … Revolt on Clause IV - the pro-nationalisation policy dumped by Tony Blair in 1995”. All four leadership contenders are seen with faces crudely photoshopped as occupants of what is described as a “British Leyland Car”. What jolly fun for the Baby Shard inmates!

Hawkes goes on (they do tend to go on at the Sun) “Labour’s bitter leadership contest erupted into civil war as Jeremy Corbyn was accused of trying to return the party to the disastrous ‘days of British Leyland’”. Readers are helpfully told that British Leyland (BL) was “the state-owned car maker famed for strikes and poor motors”. Well, not for the first years of its life, it wasn’t. And that’s not the only howler on view.

BL began life in 1968, and although this merger of Leyland Motors and British Motor Holdings was encouraged by the then Labour Government, the firm was not nationalised. That came in 1975, which brings us to the alleged “British Leyland Car” in the photo. You may have already guessed that the car is not, repeat not, repeat NOT, a British Leyland one. For the benefit of Sun journalists, I’ll take this one nice and slowly.

That car is a Morris 1100, one of many variants of what is technically known as British Motor Corporation ADO16, a family of cars launched in 1962, and for many years the best-selling car in Britain. The cars were “badge engineered” as Austin, MG, and other marques. Now, it’s true that variants of ADO16 continued in production well into the BL years, but sadly, that excuse is also not available to Sun hacks.

There are two reasons for this: one, ADO16 production came to an end in 1974, the year before BL was taken into public ownership (it was replaced by the Austin Allegro, which has gone down in infamy for being “the car with the square steering wheel”). And two, the car in that photo is not only a Morris 1100, it is a Mark 1 Morris 1100, and production of those ceased in 1967 - the year before BL came into being.

So that makes the Sun’s version of BL, er, a bit of a “poor motor” of its own. Hawkes and his pals can whine about nit-picking all they want - had someone, for instance, used a masthead of the Sun from the days before Creepy Uncle Rupe took it over, they would be the first to complain about factual accuracy.

Still, they got the name of the Labour Party right, and managed to identify the four leadership contenders correctly, so that’s all right, then.
Posted by Tim Fenton at 11:29

The REALLY funny thing about this is that when Murdoch's boot boys get so hysterical it's like being attacked by a rabid moth.

Get in their face, drive 'em mad......and sooner or later the Nazi in 'em comes out.

The same goes for the TV arse holes. Corbyn skewered a C4 News hack beautifully the other night when he asked with a slight smile, "Who's feeding you this stuff?" Well, the "who" of course is the likes of exMurdochite De Pear and the other newsy gauleiters.

Corbyn has gone a little way to restoring my faith in human nature. He'll probably lose to the machine, but finally someone has had the guts to stand up and tell the truth. By comparison, the other lot look like the tenth rate career spivs they are.

Almost anyone who laughs in the ugly mugs of Murdoch, Dacre and their jobsworths has my backing.

yvette cooper was on the BBC last night (august 10th) talking about Corbyn taking us back to the days of British Leyland.They are all in it together!

By the way Tim.

Facts have a way of destroying fascism.

To go back to BL we need a British owned car industry. I don't think Morgan, Noble or Ginetta are likely to become public sector run any time soon!

In any case, wasn't British Leyland nationalised in the 1970's because (as a private company) it went bankrupt for a myriad of reasons? The then labour government nationalised it to keep the thousands of engineering jobs and British manufacturing.

Anonymous @1954 makes a very good point that it was private business that got the original incarnation of BL in trouble and requiring government assistance. But even then it wasn't actually nationalised like say the railways or utilities. The Government put in a load of money in return for a majority shareholding - just like recent events at the banks!!! And when the shareholding was eventually sold off it was private business that presided over the withering away and eventual collapse of the company.