As the impasse between the increasingly beleaguered management of Transport for London (TfL) and the Trades Unions representing Tube drivers, signallers, and station staff continues - two more strikes have been pencilled in for the end of the month - and the date for introduction of Bozza’s Very Wonderful 24-hour Tube looks like it might slip, those out on the right are getting jumpy once again. 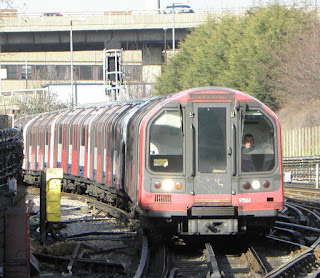 Still not running on automatic

And particularly jumpy - although still technically as illiterate as ever - are the perpetually thirsty Paul Staines and his rabble at the Guido Fawkes blog, who are full of high libertarian principles when it comes to Themselves Personally Now, but not when it’s about rotten lefties having the freedom to withdraw their labour in pursuit of an industrial dispute. Here, they once again pretend to have a solution to the dispute.

But sadly, this is, once again, the idea that someone not unrelated to London’s increasingly occasional Mayor could wave a wand, shout a few “Crikeys”, and the Tube would run on automatic, without Trades Union members to get in the way. But, as Captain Blackadder might have observed, there was only one thing wrong with this idea - it was bollocks. There aren’t going to be automatic trains this side of 2030.

The Fawkes folks can’t even be arsed doing any research: “They are striking because they don’t want the night-time tube plan to go ahead” they bleat. Wrong. Try again. “There are at least 63 automated subway train systems in the world, including London’s very own Dockland’s Light Railway”. Bullshit. The DLR cannot function without the intervention of the on-board member of staff. Who is unionised and has the right to strike.

Have another go. “It’s not just the DLR: the Jubilee, Victoria and Central lines are all semi-automatic. They don’t even call their train drivers ‘drivers’, they are ‘train operators’. Baloney. They’re called Train Operators, whichever line they drive. But there’s more: “They literally have to press two buttons at the same time and the train drives itself”. Not all the time it doesn’t. In any case, the Fawkes ranting is pointless.

There can be no driverless operation without new signalling systems and new trains, neither of which are going to be here this side of 2030. Even then, there would have to be someone monitoring and controlling operations, and, guess what? Yes, they would be entitled to join a Trades Union and, in the event of an industrial dispute, withdraw their labour. And without station staff, stations would not be able to open.

Driverless operation through older Tube tunnels may not be feasible in any case, if there is no room for trains to be evacuated (DLR fans may wish to familiarise themselves with the walkway provision in the tunnels running into Bank station, or under the Thames to Greenwich, and Woolwich Arsenal). There is not, repeat not, repeat NOT, a magic bullet called Automation. The Fawkes rabble’s gobby ignorance does not equal wisdom.

Try learning the subject before shooting your mouths off, lads. Another fine mess.
Posted by Tim Fenton at 17:29

Whilst Guido may be technically wrong you have a bit of a naive view of the future.

The future controllers of an automated railway would have the right to be in a Trade Union because CURRENT law says they do. But the law can be changed. Theoretically it would be possible to drag random people of the streets in a form of conscription, find those that can meet the right aptitude standards and make them do the job properly for £5 an hour or they go to jail. Just needs a government to pass the law. Absolutely nothing that is dependent on law is guaranteed. Which brings us to the need for staff in case of evacuation. Many on the raving right would say change the law and take the risk.

Only 3 things stand in the way of automation: the technical reality, the money and the chaos of transition. The first is mostly sorted, the second might be a problem but could be spun differently (eg base the cost/savings over 50 years when talking the press and hope they don't notice the lifespan of the kit is less than that). The months of transition is the difficult bit because to run smoothly and not cause passenger riots you would need the existing staff around to cooperate and help - but there won't be any left!!!

I'm all in favour of ranting righties like Bullingdon Bozo De Piffle.

Every time they open their mouths they leave no doubt as to just how crackpot they are. Who can forget nut jobs like Jeffrey Archer, Ceecil Parkinson, Ingham, MacKenzie, Dacre, Murdoch, Paxman, Blair, Milburn, Straw, Brown ("We've abolished boom and bust") etc. etc.

The fact that they and their policies get more and more econofascist is just history's bad joke on Britain. Inevitable too - the more they get away with, the more they'll corrupt, or find another war. It's not as though the last 30 odd years have failed to provide examples.

You think it can't get worse?.....Wait until Cooper, Kendall or Burnham get in and underpin the tories.

To all of them the Tube workers are merely an inconvenient nuisance in the way of increased profits and destruction of any notion of a truly consensual society. The same goes for ANYBODY who tries to defend the living standards of their families.

Which is why the ranting righties have to be opposed at every opportunity. Which is of course why the establishment and its jobsworth media hacks are shit scared of Jeremy Corbyn.

Thing is though, they're loud. They dominate the argument through sheer noise. So the sensible have to get equally loud in order to make their voices heard, in the process losing any subtlety or nuance, because all that matters is BEING LOUD and drowning the other guy out.

Thing is though, this means the average person looking in comes to the conclusion that 'they're all the same' and disengages. And the loud win, because their message is by its nature more simple and easy to bellow than the moderately sane (but still very LOUD) guy's.