The upheaval in world financial markets yesterday has not just worried the upmarket part of the Fourth Estate: after all, many readers of the tabloids have money invested in pension funds, either personal or corporate, which will be adversely affected by any long-term downturn. So it was that Rupe’s downmarket troops at the Super Soaraway Currant Bun decided things were so serious that an editorial comment was in order. 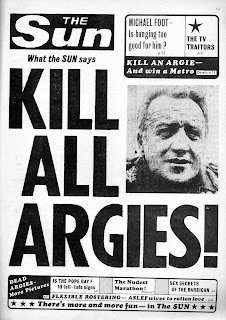 And for once, The Sun Says was calm, reasoned, even measured. Under the heading “Chinese Burn”, readers are told “THE crash in the Chinese stock market - and the impact yesterday on our own index - shows just how interconnected we all are … What happens in China has a direct effect on us. When China is booming, that’s great. But when it catches a cold, we start sneezing”. Fascinating - do go on.

“China might be run by the Communist Party, but its phenomenal economic growth has been driven by a unique form of state-managed capitalism”. So unique, Sun people, that it bears a distinct similarity to the principles set out in Keynes’ The General Theory Of Employment Interest And Money, which has been around since the 1930s, and which, in the West, papers like the Sun have been slagging off since Mrs T’s day.

But, as Clive James might have said, I digress. The Sun concludes its tutorial on China by warning “with so much Western money invested in China, and so much Chinese money invested in the Wet, the rest of us are going to suffer the consequences”. You see, there’s not really much that Governments can do - so they don’t get mentioned, let alone blamed. Well, not if they are run by the Tories, it seems.

Yes, we’ve been here before: back in 2007-8, there was a financial crisis, but this one came out of the USA, with the collapse of Lehman Brothers and the sub-prime mortgage crash. Regulators were caught asleep at the wheel, their worst error being to let Lehman go bust. This caused a market panic: nobody trusted anyone to be able to repay debts, so lending dried up. In the UK, there was a run on Northern Rock.

But what investigations in the USA and elsewhere showed was that the UK Government’s role was at best peripheral. Moreover, the actions of Pa Broon and Alistair Darling in helping to engineer a solution stopped matters getting much worse. So what did the Sun say about that? Simples. It blamed Labour. It’s still blaming Labour, using Andy Burnham’s presence at the Treasury in 2008 as an excuse to kick him.

Another editorial ranted “To gasps and groans, [Ed Miliband] insisted the Gordon Brown government in which he served played no part in the financial disaster which left the coalition with ‘no money’ in 2010 … It was all down to the grasping bankers and the global crash, he claimed. Not Labour’s overspending … There cannot be a sane person who believes that”. Suddenly it’s not globalisation when it’s Labour.

The Sun - first for rank, stinking hypocrisy since the day Murdoch bought it.
Posted by Tim Fenton at 16:11

That's the wonderful thing about newspapers - one minute it's Paper of Record or Setting the Agenda, the next it's tomorrow's fish wrapper.

I don't know what Trevor Kavanagh thinks he sees when he looks in a mirror.

Watching him, all I see is a two-faced lying neocon shithouse. But that's just my view of him.