And so it came to pass that the BBC broadcast the edition of Songs Of Praise which featured footage from the refugee camp near Calais where a makeshift church has been constructed by Christians from Syria, Eritrea and Ethiopia. The Daily Mail could not allow this opportunity to put the boot in on the hated Beeb go to waste, and so has secured the services of a self-proclaimed Christian to do the deed. 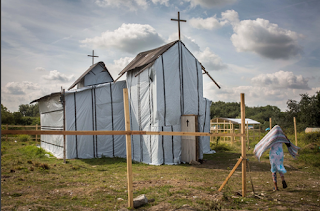 Dames, whom I’ve been repeatedly told is “one of the good guys”, has done as the Mail ordered in exchange for however many pieces of silver he was bunged for his services, but sadly has not bothered to do his research. Had he done so, he would have found the BBC’s head of Religion noting “Songs of Praise is not only about Christian music, it also explores contemporary issues and modern themes from a Christian perspective”.

The footage from Calais explored the latter theme. In any case, as any regular watcher of the programme will know, Songs Of Praise long ago ceased to be just about going along to a service and broadcasting an edited version of it; it has adopted what is knows as a “magazine format”. Dames does not allow that thought to enter.

Instead, readers are told “How the BBC must have salivated at the prospect! Migrants – some desperately trying to slip illegally into the UK – singing pleading hymns to the Lord. Now that’ll prick the conscience of the nation. And what an embarrassment for the Government … How many hymns did the worshippers of St Michael’s sing in Songs of Praise? None. Not a single verse. In fact, not a single note … we were given only a tiny glimpse of an actual service”. And see above. But there was more.

“From time to time the camera would pan back to Sally in ‘the Jungle’, where she spoke to sincere English and French Christian volunteers ‘coming to the help of these destitute people’ … One lady wanted to bring them ‘the light of the Gospel’. Good luck with that. Sorry to sound cynical, but the script glossed over one rather inconvenient but unavoidable fact about the camp: it is overwhelmingly Muslim … Also – and I wonder if anyone at the Beeb knew this – St Michael’s is Ethiopian Orthodox”.

Yes, in the world of Damian Thompson, refugees are to be sneered at, considered to be criminals, and we have to accept that there are Real Christians, and then there are mere “Ethiopian Orthodox”, who are clearly some lesser form of being. Plus, of course, this is all a dastardly cover for the real baddies, Scary Muslims (tm)!

Even Charles Moore at the Telegraph - you remember the Tel, Dames, you used to work there - has asked “what sort of a person is it who objects to the BBC broadcasting Songs of Praise from the migrant camp in Calais”, going on to tell “The camp contains many Christians, often fleeing persecution. They praise Jesus Christ more fervently than most British people and have more need of Christian mercy”.

Yet for Damian Thompson, “Christian mercy” consists of demonising what the Mail clearly considers are less deserving Christians, while sniggering at the plight of the destitute, banking the earthly rewards awarded him by the false prophets of Northcliffe House, and momentarily forgetting the teachings of Christ.

He may think that he can clean off this taint by occasionally stopping by his favoured Church and pretending to confess his sins. I have news for you Dames - you can’t.
Posted by Tim Fenton at 10:56

It's that odd thing known as Cultural (or as some call it, Cafeteria) Christianity - pick and choose the bits you like and sod the rest. As demonstrated recently by Carole Malone, who said that she was a Christian so didn't need to read the Bible or go to church. Presumably good deeds were an optional extra too.

While I'm an Atheist myself, I take comfort in the fact that many actual committed Christians deplore this attitude perhaps more than anybody else.

Well, all it demonstrates is ALL religion is paranoid superstitious shit.

Where's Richard Dawkins when you need him?

I'm reminded of a list entitled 'We care a lot: 14 overblown charity/advocacy songs besides "We Are The World"' (http://www.avclub.com/article/we-care-a-lot-14-overblown-charityadvocacy-songs-b-2217) from the AV Club (partner website of The Onion) which pointed out that "Ethiopia, a country that's more than 50 percent Christian, probably doesn't need to be schooled about Christmas by Boy George, Lisa Stansfield, and whoever the hell Sugababes are." Shamefully it had never entered my head until that point, but at least I learned a valuable lesson - only read people who know what the hell they are talking about.

And what does the New Testament say about singing and praying in church? Oh yes.
"And when thou prayest, thou shalt not be as the hypocrites are: for they love to pray standing in the synagogues and in the corners of the streets, that they may be seen of men. Verily I say unto you, They have their reward."

Yes, that's really about gestures of faith - 'look at me' exercises that won't fool any higher power that might be taking an interest.

The point being, the people praying at the camp, the people volunteering to work there, hell, even the people publicising it on SoP - they're doing something.

For the likes of Damian Thompson, his professed religion is a comfort zone. It's twee churches and chocolate box 'Englishness'. The moment ugly reality intrudes, he panics and shows his true colours - I'm alright Jack and sod the rest.

Largely ignoring the entire humanitarian crisis, as far as I can tell, rather than getting all paranoid and superstitious on us and going down there with blankets and tinned food.