Allegations of historial child sex abuse (CSA) are back in the news after claims were made that an investigation into former Prime Minister Edward Heath was not properly pursued and completed. And, with the certainty of night following day, as soon as the bandwagon got up to speed and passed within range, out jumped nominally Labour MP Simon Danczuk in front of it to claim credit for what others have already done. 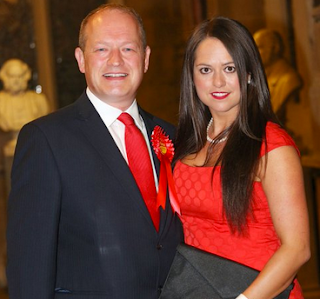 Now for the benefit of only one of Themselves Personally Now

As the Guardian has reported, “Police have launched a public appeal for victims to come forward after allegations emerged of child sexual abuse by the late former prime minister, Sir Edward Heath. The appeal was made as the police watchdog announced that it was investigating claims that officers dropped a prosecution against a man in the 1990s after he threatened to name Heath as a child abuser”. There was more.

“The Guardian has also learned that detectives have spoken to a man, now middle-aged, who says he was abused as a child by Heath on several occasions”. But, sounding a note of caution, the report also tells “The man who threatened to name Heath is believed to have been charged with a serious offence, though not to do with child sexual abuse, and was due to stand trial at a crown court”. 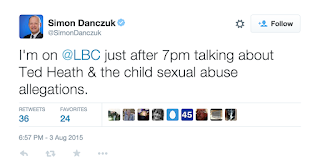 The piece also notes “Heath was unmarried and his private life has attracted speculation, some of which was lurid”. All we have are allegations and rumours; let the evidence be presented and investigated. That did not deter Danczuk, who was off on a tour of the broadcasters in short order, Tweeting as he went: “Police accused of not pursuing child abuse case against former PM Edward Heath” was his first offering.

He followed that with “I'm on @LBC just after 7pm talking about Ted Heath & the child sexual abuse allegations” before switching to the Beeb: “I'm here for this evenings @BBCNewsnight. To learn more about Ted Heath & further abuse allegations, please tune in”. After that, it was on to the papers which had decided to play along with him: “Could a brothel keeper provide evidence into Ted Heath child abuse claims?”

Danczuk was even prepared to go along with the Sun, asking on their behalf “Were you abused by former Prime Minister?” However, and here we encounter a significantly sized however, the allegations about Sailor Heath have been swirling round for years now, so where was Danczuk then? The answer is that he wasn’t. There were claims made three years ago, but the Labour MP involved was not him.

Instead, it was Tom Watson who “said that he had personally reported to the police two allegations against Heath since 2012”. He also “said it was time for the creation of a new national police unit to target paedophiles, to run alongside the new inquiry into historic cases involving high profile politicians”. Spot the difference: Watson gets the Police involved, encourages them, suggests new initiatives. Danczuk merely grandstands.

Simon Danczuk is the cheapest kind of shameless opportunist. No change there, then.
Posted by Tim Fenton at 16:43

Am I the only person who finds it a bit fishy that these allegations have re-surfaced in the run-up to a referendum on Britain's EU membership?

interesting point 'unknown' - and worth noting that another prominent eu supporting tory has also recently found himself facing accusations of a similar nature to ted heath. the tory right - allegedly with the connivance of elements of british intelligence - started circulating smears and innuendo against ted heath in the early 70s, part of their strategy to replace him with thatcher. and it would seem these smears and innuendo are in part resurfacing decades on - just in time for the eu referendum.