Sometimes you need to know the background story to understand what the tabloid press is rabbiting on about. This was exemplified by today’s edition of the Super Soaraway Currant Bun, which has run an article titled “WITLESS FOR THE PROSECUTION … CPS ‘meltdown’ as crims walk”, backed up with the words of The Sun Says, telling readers “Carry On Criminals”. What’s it all about? 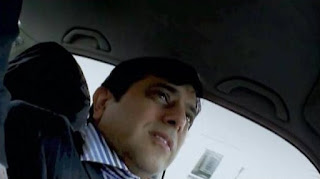 Why is Maz so valuable to the Murdoch empire?

Ah well. The Murdoch empire never puts the boot in for nothing, and nor does it leave anything to chance when a little spinning and smearing is deployed. Consider first the “story” of the CPS “meltdown”, where this “Exclusive” article claims “A whistleblower and top barrister claimed the CPS is on its last legs”. Note that readers are not told whether this “whistleblower and top barrister” have anything to do with the CPS.

So we can safely assume that it’s someone who is useful to the Sun, but not necessarily involved with the minutiae of CPS work. All that is required is that this “whistleblower” is prepared to tell “Our lawyers are overloaded with criminal cases while we take on vanity trials with little chance of success. All the managers care about is good PR … we’re having to ignore serious cases as we have too many to deal with”. 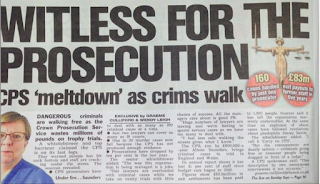 There’s more: “I feel less safe walking the streets given what I know”. Note also that the article, while conceding that the CPS has “lost 31 per cent of staff since budget cuts began in 2010”, attributes no blame at all to Government. No Sirree, the culprit is CPS head Alison Saunders, because she is being paid £600,000 a year. That means it’s known as “Carry On CPS” (most Sun readers, sadly, will never have seen a Carry On film).

Nor will they have seen Kenneth Williams deliver the immortal line “Infamy! Infamy! They’ve all got it infamy!” (Carry On Cleo, in case you wondered) which the Sun’s not at all side-splitting editorial recycles. What some of them will know, however, is that the CPS’ workload includes their careful and lengthy consideration of pursuing a case for perjury and conspiracy to pervert the course of justice against one Mazher Mahmood.

You won’t see that in the Sun, of course, but Press Gazette revealed last week that the Police passed the results of their investigations on the Fake Sheikh to the CPS early in June, and a CPS spokeswoman told “This is a complex area of law and it is vital that the file is carefully considered. A decision will be made as soon as is practicable”. For appeals against Maz’ stings to go ahead is one thing - putting him on trial, well, that’s bad.

So it is that the Sun is talking of “vanity trials with little chance of success”. If the CPS does decide to proceed against Mahmood, that will be ramped up to a full-scale assault, whether doing so crosses the contempt line or not. Creepy Uncle Rupe and his pals do not want this dirty laundry to be aired in a court of law. They are not paying Mazher Mahmood’s legal bills for nothing. And they want the CPS to know they are watching.

One has to wonder what they are scared of. Perhaps we will find that out very soon.
Posted by Tim Fenton at 16:42

Ooooo those Murdoch boot boys are getting bowel movements again as they feel a Plod hand on their collective collar.

It would be dead funny if their latest crim sings like a canary and has more of them in the Slam.

I'd love to see Kavanagh explaining his medical condition to Sweet Pants. He'd be lying then too.