Yesterday, in a shopping centre near the Virginia town of Moneta, during a live broadcast on local TV station WDBJ7, reporter Alison Parker and her cameraman Adam Ward were fatally shot by an apparently disgruntled former colleague, Vester Lee Flanagan. It was the latest in a series of multiple shootings across the USA, where lawmakers are seemingly powerless to curb such incidents in the face of the gun lobby. 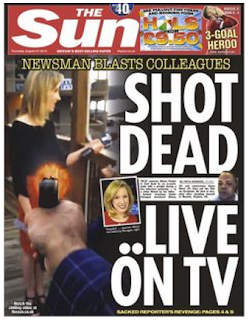 So much, so grim, but today has brought the reporting of the tragedy, and while some papers have shown restraint - the Express and Guardian used the same still photo of Ward and Ms Parker, for instance - others have succumbed to the temptation to use the story to flog a few more copies. The Mirror, showing a horrified Ms Parker, is typical (the Mail also used that same image). And then there was the Sun. 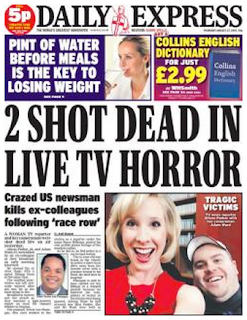 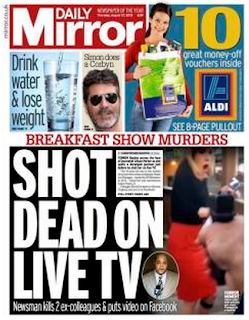 So it was with the Sun, with the photo not only showing the murder weapon being pointed at Ms Parker, but the muzzle flash, just to make sure readers knew what was going on. That much was bad enough, but, as Nick Sutton warned prospective purchasers, “If you think the front page is shocking - inside tomorrow's Sun are five more photos taken from the gunman's video”. And, as the man said, there’s more. 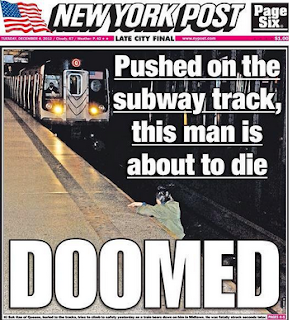 Look again at the front page: at the lower left of the page, readers are told “Watch the chilling video at thesun.co.uk”. Yeah, buy our paper and you can watch two members of our own profession getting executed! Well, we all get our jollies somehow, I suppose, but that has to have crossed the decency line. It easily beats the Reeva Steenkamp front page, with its “Look, she’s hot … and she’s dead” message.

So where is the Sun’s PR and spin counter-initiative this morning? Seemingly, it isn’t. Both managing editor Stig Abell, the agreeable and highly intelligent public face of the Murdoch rabble, and his far less agreeable PR man Dylan Sharpe, have been keeping their heads down. So that means they’re not going to say sorry, and unless a relative of the deceased complains, sham press regulator IPSO won’t do anything about it. 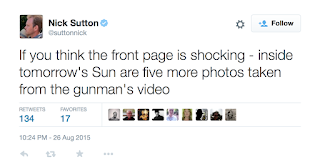 The Murdoch press is so sick that it doesn’t even care for the dignity of its own profession. Worse, it’s prepared to take punters’ money in exchange for a sight of those two journalists being shot dead. The staff at WDBJ7 and the families of the dead have experienced a traumatic and harrowing loss, but meanwhile, other people calling themselves journalists are just happy to sit there and watch the money roll in.

Tim, this is WRONG:

After all these years, after all the disgusting examples, Abell hasn't the slightest excuse.

Which means he's as bad as the rest of them.

Typical Citizen Drain - A bitter and twisted conduit to the sewer.

Christmas came early for the Mail yesterday. Apart from the shooting, there was this.
"Shocking video shows three-year-old girl's horrific final moments as she is callously thrown in a hotel pool by her stepfather before drowning"

And the Mail seems to have regarded starting this headline with a pun appropriate.
"Playback time: Cameraman who was murdered on live TV had filmed the moment crazed race-grudge reporter was fired and escorted from the station building two years ago"
Stay classy, DM.

No class. I wouldn't use it to wrap my chips.

As they say, I wouldnt cross the street to pee on the S*n if it was on fire.

BTW Some of the automated Verify images are a bit tricky. Who has waffles in this country?

I haven't seen the video and I don't particularly want to but there is a suggestion that The Sun doctored that pic to include the muzzle flash, perhaps from a later frame. It seems consistent with other pics that the reporter sees her attacker before he fires yet that front page pic is before she has seen him and is, therefore, before he fires the gun.