How does a new entrant to the field of group blogs drive traffic? Well, in the case of our friends at The Commentator, this is done by aligning itself to reliably right-wing causes: demonising Hugo Chavez, demonising Barack Obama, and demonising anyone who does not take a sufficiently acceptable stance on anything that concerns the state of Israel. It is this last that has come to the fore at the Olympics. The former athletes' village at the Munich Olympic Park

Commentator owner Robin Shepherd – to whom I would commend this previous Zelo Street post, just to bring him up to speed on where I’m coming from – has observed that a petition and campaign to commemorate the victims of the 1972 Munich massacre as part of the London 2012 opening ceremony was unsuccessful. The request did not come from the Israeli Government.

Moreover, as has been discovered by those seeking some kind of precedent, there was no marking of the tragedy at the opening ceremony of the 1992 Barcelona games. This, though, does not detain Shepherd, who fashions his observation with care: “refusal of the IOC appropriately to honour the memory of the 11 Israeli athletes” is his line (my emphasis).

Because the IOC will honour the memory of those eleven Israeli athletes, on the exact anniversary of their death – September 5 – and at the exact spot, the airfield at Fuerstenfeldbruck. Whether or not that is appropriate is a matter of opinion, and will no doubt be fruitful territory for many a debate over the coming weeks. But the fact remains that the event will be remembered by the IOC.

This, too, does not detain Shepherd, who merely cranks up the rant-o-meter further: “Jewish athletes gunned down in their prime in the country that gave the world the Holocaust” he froths. Think the Third Reich reference was an isolated one? Think again: “appeasement of the Palestinians and their supporters across the Islamic world”. So Muslims and Hitler go together.

Then he says it’s only because they were Israelis. Did he ask anyone at the IOC? Why bother, when you’ve made up the conclusion? By attempting to portray that body as intolerant, Shepherd shows that is exactly where he is coming from. He pretends to speak for Israel, but it is nothing more than hit-bait for The Commentator. He ends up not advancing the cause of those murdered one bit. 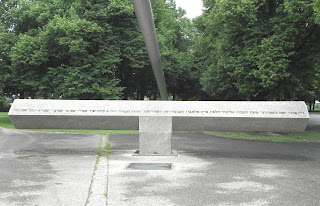 Here on Zelo Street, there is no view cast in stone as to the best way that those eleven Israeli athletes, as well as one German policeman, should be commemorated. But they should be remembered. So here is the memorial to all of them at the Munich Olympic park (the names of the Israelis are marked out in Hebrew). Robin Shepherd has managed not to let his readers see it.

Not that he prioritises ranting over remembrance – perish the thought!
Posted by Tim Fenton at 16:00