Today has not been a good day for accuracy or honesty at the Guido Fawkes blog – to which some will observe “no change there, then” – as the perpetually thirsty Paul Staines and his tame gofer, the flannelled fool Henry Cole, go after the Trade Union movement and accuse them of information bias, while not having any information bias of their own, as they can’t be arsed providing any. 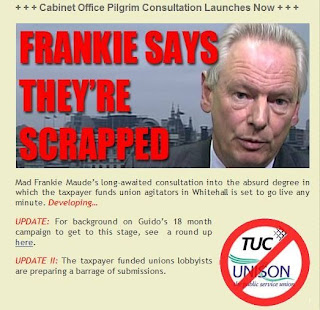 I blame the education system

Cole warmed up for the day ahead by demonstrating the superior command of grammar that only an expensive private education can buy, as he talked of “taxpayer funded unions [sic] lobbyists”. He had another go, but got his apostrophe in the wrong place. He then told anyone listening that he was going to consult with the Trade Union Reform Campaign (TURC) press team, which is himself.

Fortunately, the flannelled fool was able to persuade discredited former Tory PPC (now removed from the candidates’ list) Mark Clarke to join him. Clarke brought all the purpose and gravitas one would expect from someone with around 50,000 phony Twitter followers. To keep them safe, they took along Cole’s flat mate Christian May, so all could reassure themselves of their political righteousness.

... make that himself and himself

Thus reassured, Cole returned to the fray with a vengeance, and penned a post for the Fawkes blog titled “Tax Funded Union Research Backs Tax Funding Of Unions”. He had no evidence that the research he was discussing had been thus funded, so just made it up. And, as I’ve shown, Unions are not being funded by taxpayers’ funds, so he made that up as well. 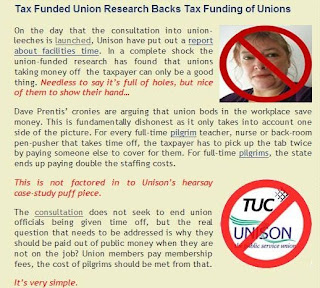 But his dander was well and truly up: “On the day that the consultation into union-leeches (!) is launched, Unison have put out a report about facilities time”. Quite apart from the unfortunate language, the report was not put out today. The Zelo Street inbox received its copy beforehand, and the document clearly says “June 2012” on its front page. Still, details, eh? 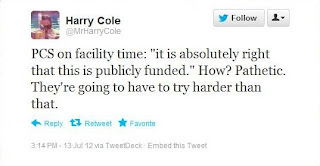 Petulance - it's cheaper than research

He then whines “it’s full of holes” and claims that the real costs of Facility Time are “not factored in to Unison’s hearsay case-study puff piece”, but cannot cite any study that supports his stance. Nor will he, as there is none. But he has one more weapon to deploy: there will be a submission to the Cabinet Office consultation from TURC, in other words, from Himself Personally Now.

But, as he knows absolutely sweet jack about what Facility Time involves, invalidates his case by resorting to abuse, and cannot even get the month that a study is released right, he might as well not bother, unless his objective is to provide the Civil Servants at the Cabinet Office with an opportunity to reprise the Cadbury’s Smash advert. Then they’ll smash his case to bits.

Still, it helps him to pretend he’s a real journalist. Another fine mess, once again.
Posted by Tim Fenton at 17:42

So is Harry a member of the NUJ?

Ah, but Master Cole does not do Union stuff. So that'll be a no, then.