Aidan Burley’s less than helpful Twitter intervention on the Olympic opening ceremony is still making news, although the Games themselves will probably eclipse his media exposure and keep it on the dark side of further examination – provided, of course, that he keeps his head down. All will then be a matter for his party at Westminster and in the constituency. 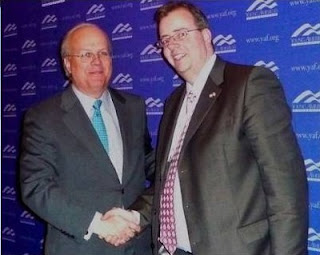 In the meantime, though, those concerned at the kind of ideas and political stance typified by Burley and his contemporaries should, I would urge, look behind the front men to who, and what, is driving the movement that has brought us the New Conservatism, this less than tolerant strain of right-wing belief that is set to cause the Tory Party, and the Republican Party in the USA, significant problems.

And here we encounter an old favourite of Zelo Street, Donal Blaney. Just because he is no longer a front line politician and activist does not mean Donal has retired from such activities to spend more time with his legal practice: far from it. Blaney, as I keep pointing out, is not stupid: he knows that his best contribution comes from organising, networking and enabling. Others can be MPs.

Blaney co-founded the Young Britons’ Foundation (YBF), which is modelled on the Young America’s Foundation. It works closely with Stateside organisations such as the Leadership Institiute and Heritage Foundation, and in promoting conservatism, “identifies, trains, mentors and places philosophically sound activists in politics, academia and the media”. For “sound” read “acceptable”.

Like lobby groups such as the so-called Taxpayers’ Alliance (TPA), there is much emphasis on media training: the realisation of how effective a broadcast or printed paragraph can be. There is also the assumption that existing media outlets have an inbuilt left-wing bias, rather than that they do not serve up news that Blaney finds acceptable. He’s a big fan of Fox News Channel (fair and balanced my arse). 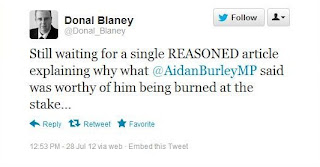 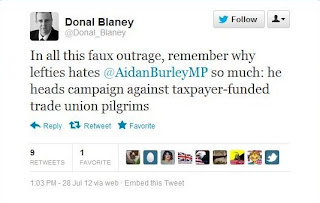 So how does the master handle criticism? As before, Blaney proves Olbermann’s dictum – “The right exists in a perpetual state of victimhood” – true at the outset. Criticism of Burley means unnamed “leftists” supposedly want to “burn him at the stake”. The “faux outrage” is held to be because he is leading the so-called Trade Union Reform Campaign (TURC). But TURC is an ineffective joke. 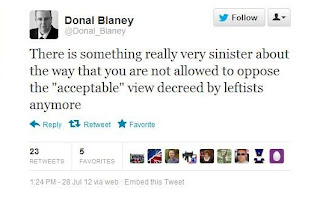 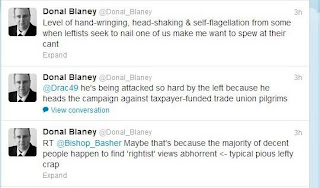 Then comes the magnificent “There is something very sinister about the way that you are not allowed to oppose the ‘acceptable’ view decreed by leftists anymore”, which verges on the paranoid, before he loses it completely and says he wants to spew on someone. And all the time he wants a reasoned critique to be made of Burley – but only one that he deems acceptable, or “sound”.

Thus the authentic voice of right-wing intolerance. He is the one driving this bus.

[UPDATE 30 July 1100 hours: in case anyone had not appreciated the drift of Donal Blaney's thinking, here is a clutch of contiguously broadcast Tweets from the last 12 hours. 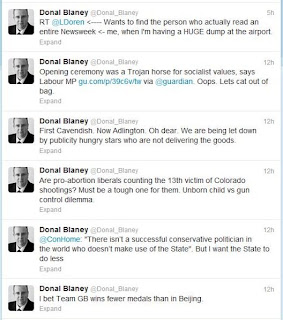 From whataboutery on gun control - Donal is with the NRA on this one - to pushing the "smaller state" agenda so beloved of the TPA, bashing anything that looks like "lefties", sneering at Team GB's athletes, and ultimately telling his followers what he does in the mens' room, this is one bloke you might not want to get stuck in a lift with. And, as I noted previously, he's the one driving the New Conservatism bus]
Posted by Tim Fenton at 18:55

Fred in the Green said...

Many people say crass and stupid things from time to time. It's a measure of their character and the character of those surrounding them, how they react when this is pointed out.