Nowhere has the disappointment at the charging of several former Murdoch stalwarts been more intense than in the world of Dennis Rice, the journalist has-been who scrapes a living feeding tit-bits to the cheaper end of the Fourth Estate and claims that his Twitter persona @tabloidtroll is “a number of national newspaper journalists”, although that number is one, and he missed the word “former”. 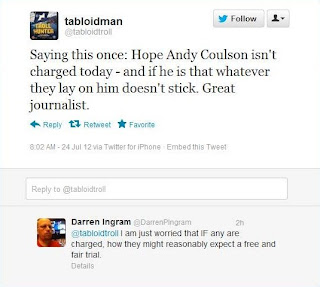 Rice set his stall out earlier by letting his followers know just where he stood: “Saying this once: hope Andy Coulson isn’t charged today – and if he is that whatever they lay on him doesn’t stick. Great journalist”. Clearly, being a “great journalist” overrules Coulson’s involvement in a variety of less than savoury pies, not least the Matt Driscoll unfair dismissal case. 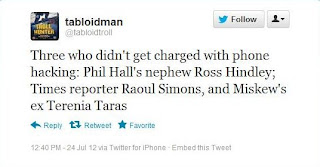 Here, a culture of bullying at the Screws under Coulson’s editorship was uncovered, and Driscoll walked away with around £800,000 as his unfair dismissal claim was upheld, believed to be a record for this industry. But this does not concern Rice, and nor it seems does Coulson’s closeness to Jonathan Rees, the private investigator whose firm Southern Investigations worked all too closely with the Screws.

Southern Investigations and the Screws were bound together by events such as the surveillance on the Police officers involved in the investigation into the murder of Rees’ former business partner Daniel Morgan, who had ended up in a pub car park with an axe embedded in his head. The excuses advanced by Rupe’s downmarket troops for their behaviour were laughable in their sheer idiocy.

Yet Rice cannot allow the reality to permeate his impenetrably thick exterior, instead bleating about those who were arrested and not charged – for whom everyone is supposed to feel sympathy – while managing to forget all those arrested and not charged that the cheaper end of the Fourth Estate all but hang on occasion of the former, while never telling readers of the latter. 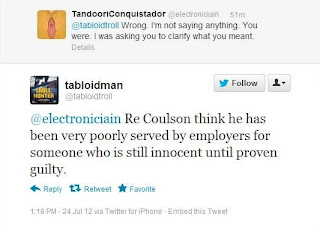 Dennis Rice seems to think that those who see him as a figure of ridicule are somehow trying to get at all those increasingly over-worked and under-resourced journalists who put in longer and longer hours in an industry where their security is increasingly precarious. That is not the case at all. Those who, like me, see Rice as nothing more than an idiot-at-large do not include others in the charge of idiocy. 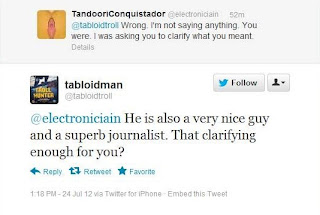 What the Tabloid Troll is missing is that Phonehackgate, and all that has come since, has shown not that individual hacks are poor journalists or bad people, but rather that owners, editors and managers have turned their papers increasingly into corrupt vehicles for vicious agenda driven copy, backed up by whatever it takes to stand up whatever proposition is being advanced on any particular day.

And if Dennis Rice thinks that kind of behaviour is defensible, he really is a fool.
Posted by Tim Fenton at 10:24