All manner of individuals and groups work tirelessly to get their PR into the papers. Sometimes they strike lucky and slebs, producers and broadcasters all benefit as the Fourth Estate bows to the constant pressure on journalists and helplessly churns over their spin in order to fill a few more column inches. So it has been with the supposed return to the BBC of now veteran host Noel Edmonds. 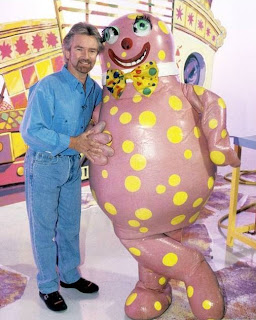 What you will definitely not see

For those who are not of A Certain Age, it may be news to know that Edmonds was a Saturday night fixture for many years on BBC1, with his Late Late Breakfast Show, then Noel’s Saturday Roadshow and finally Noel’s House Party. These spanned the period from 1982 to 1999. The House Party was eventually killed off as its ratings were falling and the format just got tired.

The series were not without controversy: one early critic of the Late Late Breakfast Show, observing yet another risky looking stunt, noted that the only thing which would stop them would be if someone got killed. And this, indeed, came to pass: the show was pulled after someone did get killed in a stunt that went wrong. Edmonds was singularly fortunate that the Beeb took him back – twice.

So it might have caused a few sharp intakes of breath at the Corporation to read in today’s Sun that “a lot of baggage comes with [Edmonds] returning to the BBC” followed by “He’s enjoyed working in the commercial sector and doesn’t need the money”. Very good. Edmonds may well not be on his uppers. But the prospect of appearing before a prime time audience once more is not to be sniffed at.

And there is one other reason that he would benefit from returning to the mainstream: Edmonds has for some time now been spreading the word that Government energy policy is all wrong and that we face an increasing regime of power cuts. In 2008, he told that these would become commonplace within three years, and that having the Olympics would mean more of them.

This was all part of his sales pitch for the Renewable Energy Foundation, which exists to, er, rubbish renewable energy. In the same piece, Edmonds asserted that Supermarkets would have to return to six day opening. “Fresh food and efficient sanitation” would be “at risk”. Airports would have to suspend flights. Ordinary people would find themselves in the “cold and dark”.

And it all turned out to be scaremongering claptrap. Fortunately, the BBC has come along with just the thing to chase away any inconvenient digging up of the recent past, so Edmonds’ “pal” who has told the Sun “the BBC should probably not count their chickens yet” would be best advised keeping his North and South well buttoned up. It is Noel who needs the Beeb, not the other way about.

A couple of years ago Noel was loudly not paying his TV licence, which would have been against the law, and to the cost of his new employers.

Who mentioned Keith Chegwin? Was it you? Go and stand at the back.