The central premise of the Guido Fawkes blog is that those doing the writing are the Good Guys, and those they write about – generally politicians and their friends and hangers-on – are the ones for hire, able to be bought and bought off. Thus the perpetually thirsty Paul Staines and his tame gofer, the flannelled fool Henry Cole, maintain their image for their readership. I deserve a peerage, cos I'm on telly!

So perhaps Master Cole would care to explain this magnificently swollen-headed Twitter exposition from earlier today. When Tony Grew asserted “I have always said I would happily take a seat in the (appointed) Lords”, Cole replied “well that’s completely different ... if my country were to ask me to serve, it would be churlish to say no”. There’s modesty for you. 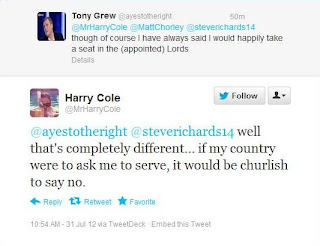 That means, quite apart from the ridiculously exaggerated sense of his own worth – a word in your shell-like, Hen, it’s not exactly a lot – the flannelled fool is saying he could be bought off by the award of a gong plus a decently sized bung. What will the sainted Staines have to say about this wayward lurch from his protégé? Another fine mess, once again.

[UPDATE 1830 hours: Master Cole, who does not, repeat not, ever look in on Zelo Street - and has even blocked the blog's Twitter feed - has nevertheless seen this post. He has told that his remark was "a pisstake", something I will leave to others, who have not exactly been rushing to his defence. 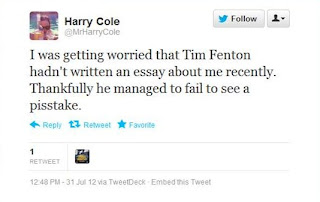 I also have to tell the flannelled fool that (a) his only "worry" was that I would make him look even more ridiculous than he already does, (b) some of us are not stuck in the schoolroom and so do not make the mistake of calling blogposts "essays", and (c) anyone who is bothered can spot one of his whoppers a mile off.

The only "serving" anyone is likely to ask Cole to do in the foreseeable future is the kind where he assists in doling out the food and drink, which will also be the closest he gets to a gong. As I said, another fine mess, once again]
Posted by Tim Fenton at 12:44