Another week, another lame attempt by the assembled hackery of the legendarily foul mouthed Paul Dacre to dredge up something that the Daily Mail can use as a stick to bash the Middleton family. Today’s formulaic piece, by Rebecca English (hmmm, that’s a good Mail surname, isn’t it?), combines the usual line of suggesting that the family is cashing in on, well, something, with the Olympics. 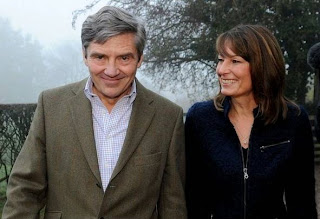 “Gold medal for cashing in goes to... Pippa and the Middletons: Family firm could be in breach of strict Olympic advertising laws with new products” trumpets the headline, satisfying the Dacre requirement to mention Pippa specifically – a particular Mail obsession – while keeping just the right side of the defamation line by telling that the family “could be” doing something wrong.

But this is complete crap: the Middletons are consummate business professionals, and would not leave an issue that could mean pulling entire product lines to chance. It is clear from a look at their offerings for “The Games” (clue for dopey Mail hacks: the word “Olympic” is missing) that Party Pieces has steered clear of the various branding and wording constraints being imposed.

For example, those “rings in Olympic colours” are fine, as in the form they are sold, they are merely differently coloured rings. There would only be a problem if the rings were assembled – and advertised – in the Olympic pattern. Same with the torch that has been given a Union Flag pattern: that’s not what the real ones look like, and again, there are no recognisable Olympic devices on view.

In fact, rather than hindering the Middletons, as was probably the intention, listing what Party Pieces is selling in its “Games” related range will probably generate even more business, so it’s no surprise that “Party Pieces was unavailable for comment last night”. The family can keep quiet while knowing that business will not suffer and the only casualty will be the Vagina Monologue’s blood pressure.

So what’s the attack on the Middletons really about? Ah well. After the usual snark about Carole Middleton having been an “air hostess” (which means she’s well trained and well experienced in dealing with wayward hacks), the article finally gets to the point: “The finances of Party Pieces are unclear because it trades as a partnership rather than being registered as a company, which would entail lodging accounts with Companies House”.

Yes, the Mail is really, really ticked off because they can’t find out just how much money the Middletons are making. And if they can’t find that out, they can’t stand up their knocking copy about the family’s new house. Or all the stuff about whether Wills is chipping in for converting the outbuildings.

Good thing too. Now perhaps Dacre’s finest can do some proper journalism.

[UPDATE 21 July 1440 hours: the deeply subversive Guardian has confirmed that Party Pieces has been cleared by Locog, and its product lines can therefore continue to be sold as before. So much for the Mail's ridiculous suggestion that the Middletons' company "could be" doing something wrong.

A Locog spokesman confirmed "There are no infringements and the products are fine". But the Mail piece, with its talk of "criminal offence", "court action", and "£20,000 fine" is still live and has not been recognisably altered. In Dacre land, if you're going to smear, do it properly and don't retract until and unless you have to, eh?]
Posted by Tim Fenton at 18:51