What’s Going On At Reading?

Walking back to the station at Reading on Saturday afternoon, I was asked what all the upheaval was about: why, when negotiating concourse, footbridge and platform was difficult enough, given the number of trains and passengers involved, was it all becoming much more difficult, with the imposition of building works and occasional disruption to the timetable? 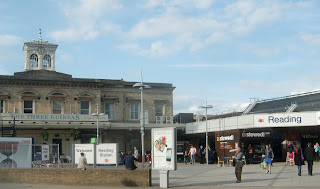 Reading station has, like so many similarly sized interchanges, been expanded piecemeal over the decades. Formerly Reading General station – and home mainly to trains run by the Great Western Railway and then BR’s Western Region – it was then adapted to fit in the Southern Electric services to London’s Waterloo terminus. All the while, passenger numbers rose.

Then came the High Speed Train, which in turn drove more demand: commuting to London became vastly more popular. Later, Reading became host to much new industry, often in the high-tech area, and so commuting into the station, as well as out of it, grew. And on to the event horizon recently came electrification and the Crossrail scheme. Push had come to shove. 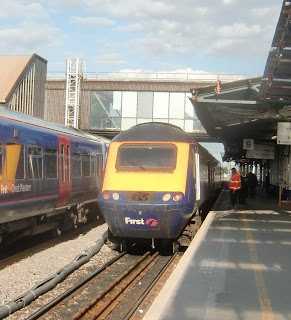 InterCity 125 departs for Paddington. Scaffolding at top right of shot

Those believing Crossrail will not reach Reading should forget that one, by the way, and quickly: there will be servicing and stabling facilities there for the new trains. So the opportunity has been taken to provide enough platform space for foreseeable demand, together with installing some grade separation (flyovers if you like) to cut down the number of conflicting train movements.

That last should make services more reliable and improve timekeeping. Also, there will be a new internal footbridge to the immediate west side of the old station building (that’s the one that now houses the Three Guineas bar). Regular travellers will know that the current footbridge has to double as an internal facility and a thoroughfare, which does not help passenger flow at busy times.

The Reading station rebuilding is another sign not only of surging demand for train services – particularly in the South East – but also that the old BR policy, of “managing decline”, may have taken too much capacity out of The Railway in the 1970s and 80s. It follows big updating projects at other large stations, like Wolverhampton, and Manchester Piccadilly.

Network Rail has information on the project HERE including maps, service information, and the inevitable artists’ impressions of What You Will See. There are also photos of the work already done, which has involved some seriously heavy lifting and cool heads at work. As the timeline suggests, the new building will be opened next year, with other work continuing until 2015.

And, hopefully, it’ll be nice when it’s finished.
Posted by Tim Fenton at 18:00