We rail enthusiasts sometimes have little to get enthused over nowadays. It’s hard to get into a deliriously happy state over the fares structure, and the minutiae of splitting tickets to bring the cost of a trip from Crewe to Reading down from over £73 to under £50, although the saving is worth having. But one can get enthused about the sight of steam traction on a summer day – like today. 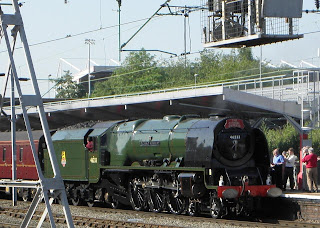 The morning began with a charter from Lincoln to Carlisle, which was taken over at Crewe by Pacific loco Duchess of Sutherland, now in BR green following its recent overhaul. This included the boiler – without a “ticket” for the boiler there can be no clearance to work over the network – as well as all those moving parts, many of which are out of sight between the frames. 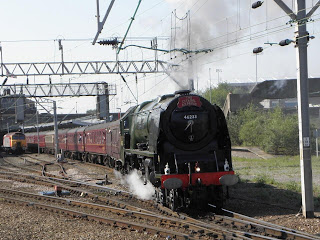 Right on time, Duchess of Sutherland restarted its train – just the 420 tonnes on the back today – and another load of happy punters was on its way. There was a pause for enthusiasts to swap a little chat and pass the odd nugget of information, before positions were taken up to photo another special, this time coming from Tyseley, home of the Birmingham Railway Museum. 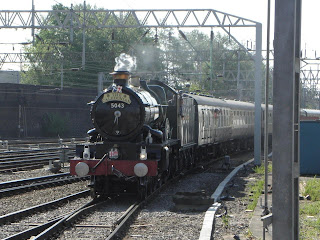 Earlier than scheduled, an immaculate “Castle” class loco, Earl Of Mount Edgcumbe, arrived for its water stop. The green livery is a little darker for Great Western locos, because as any fule kno, for the Great Western, there was their way, and there was the wrong way. And their way was to retain their darker green livery, copper caps for chimneys, and none of those silly Pacific locos, whatever BR said. 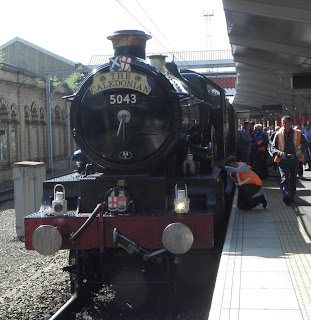 This charter was destined for Edinburgh, a long pull for one steam loco in one day (a “Castle” would, in the 1950s, do no more than London to Newton Abbot as its longest run, or perhaps London to Shrewsbury and Chester). So the crew were keen to make sure they went round and lubricated all the oiling points during the stop at Crewe, before getting the fire ready for the off. 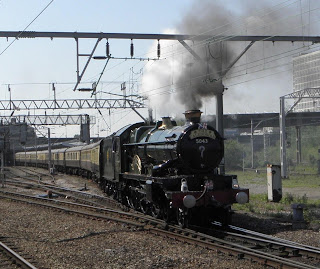 And then Earl Of Mount Edgcumbe was steadily away, with 370 tonnes or so, to ultimately deposit its punters in Edinburgh this evening. The loco has a trip out and back from Edinburgh tomorrow, and returns south on Monday. There are more steam charters over the summer holidays: the current programme can be seen HERE and there are links to promoters for every tour.
Posted by Tim Fenton at 19:25