Some were there out of curiosity, some no doubt because the roads were closed for more than three hours and little else was moving in the town, but most were there to see an event that would not come round again in their lifetimes. Although the Olympic Games brings an awful lot of surplus hoopla, seeing the Flame passing through your town is a special event. 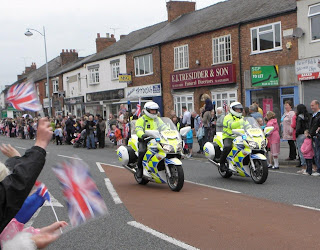 So it was no surprise that the route was busy well before 0800 hours, when the torch relay was due to set off from the north east corner of Crewe, before passing through the town centre, then south along the straight and narrow of Edleston Road, before heading along Nantwich Road past the station and back out of town once more. And every Police motorcycle in Cheshire must have been there. 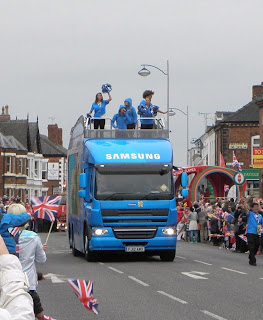 And first to arrive after yet another wave of Police bikes and cars was the hoopla. Here’s the custom Samsung (tm) vehicle, complete with big screen on its side, unfeasibly loud music, and over-enthusiastic young people pretending that, despite the leaden skies and intermittent rain, they’re having the Most Wonderful Time Of Their Entire Lives right now. Yeah, right.

Behind the Samsung (tm) hoopla wagon was an even more gross Coca-Cola (r) (tm) hoopla wagon, and there was even a Lloyds TSB (r) hoopla wagon behind that. And then there was nothing. Was that it? Where was the Olympic Flame? I dunno about the thousands of others lining Nantwich Road, but I hadn’t walked all this way just to see a line of sodding hoopla wagons. 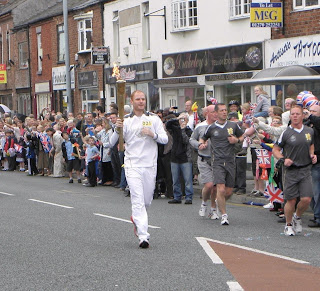 And then, behind yet more Police motorcycles, there it was. One man in white and his Flame, with a number of support joggers in more discreet grey. Flags were waved one last time. Whistles were sounded (a lot). Many cheered. Far more scrambled to get a photo and a high percentage discovered they hadn’t turned off the default flash, so need not have bothered. 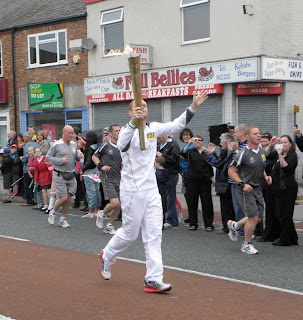 There it is, the Flame, its bearer slowing momentarily with arms raised, passing by. And yes, that takeaway in the background really is called Full Bellies. Subtlety with fast food in the Nantwich Road area is not set at a particularly high level. And that was that: Harvey’s sudden demand for take-out coffee ended, the flag sellers vanished, and it was back home for a late breakfast.

It wasn’t like London 1948? I wouldn’t know. I wasn’t around yet. And I won’t be there next time, if there is one. Whatever your view of the Olympics, it’s a once in a lifetime thing, and for my adopted town, it happened this morning. As you were on Nantwich Road – cue all-day traffic snarl.
Posted by Tim Fenton at 09:59