The dwindling band of hacks at the Desmond press continues to work tirelessly in churning out front page stories that cost next to nothing, involve no investigative journalism, and yet still frighten the target demographic into buying otherwise worthless rags like the Express. And, as the weather is the same as yesterday across much of the UK, today has seen a return to EU bashing. 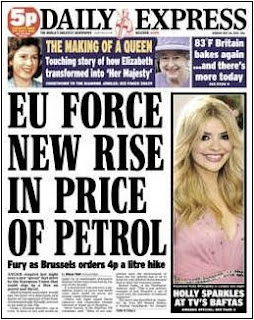 “EU Force (sic) New Rise In Price Of Petrol” is the screaming (and ungrammatical) headline. So will the cost at the pump be rising on account of anything EU related any time soon? Regrettably for Des’ finest, the answer is an unequivocal no. Macer Hall’s piece is about a move to obtain 10% of the transport sector’s fuel (my emphasis) from other than fossil fuel sources by 2020.

So no “Anger erupted last night”, as this is not new news, and nor is there any evidence that the cost of motoring would be increased as a result (although it may well rise due to other factors). And, as with all EU directives, the 10% figure has been agreed by all member states – including the UK. But the Express has its anti-EU agenda to promote, so out comes the full range of frighteners.

These include the blatantly made up “The Prime Minister was understood to be ‘acutely aware’ of the worrying implications of the EU hiking the cost of fuel” and “Senior Tory ministers fear the move may trigger an angry backlash from motorists and could even lead to fuel protests bringing the country to a halt”, which are also predicated on the story being true, which it is not.

We can see what is actually happening to check this out: it was reported in January last year that “the 2020 renewable energy policy goals are likely to be met and exceeded if Member States fully implement their national renewable energy action plans”. How so? Well, consider this snippet: “It also depends on the contribution of non-road transport modes towards achieving the RED 10% target”.

Yes, what the Express isn’t telling its readers is that the 10% target does not just include road transport, and it’s about much more than biofuels. More energy for rail travel – including freight – will come from renewable sources, and that isn’t going to move petrol prices anywhere. Trams and electrically powered buses will also contribute. We’re already exceeding the earlier target of just under 6%.

Sadly, though, the pundits who have given this rubbish the sheen of credibility – Tory MP Robert Halfon and Robert Oxley of the so-called Taxpayers’ Alliance – haven’t bothered to engage brain before trotting out the usual formulaic response, and have therefore given the Express story a credibility it does not deserve.

That, though, will not trouble Des’ hacks. After all, they’ve sold a few more copies, and we know what that means: another Benchmark Of Excellence.

[UPDATE 29 May 1855 hours: having indulged in publishing a totally fictitious story, the Express has followed it with an equally fictitious editorial. "For Brussels to dictate quotas for the sort of petrol sold across 27 EU member states is a clear example of the arrogance of Eurocrats and their disconnection from popular concerns" fumes the piece.

Sadly, as I've already shown, it isn't about "petrol" (or influencing the price thereof), but the amount of fuel used by the transport sector, which means lots, lots more. And, as we're already exceeding the earlier 6% target, the idea that we'll have a problem passing 10% by 2020, with more renewables coming on stream all the time, is complete crap]
Posted by Tim Fenton at 13:03