It’s just the kind of story that Littlejohn could have spun out into a whole one of his tedious and unfunny columns: “Train delayed so guard could eat his dinner” howled Rupe’s downmarket troops at an apparent story from the town of Ashford. You couldn’t make it up! Mind how you go! Must be some Yuman Rights and Elf’n’Safety racket too! Why-oh-why material to die for. 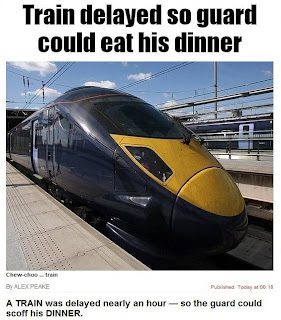 Pedantic detail: the Sun even got the train type wrong

Or is it? “More than 50 furious commuters were waiting to board the 10.17pm from Ashford International in Kent to Maidstone East”. Commuters? They keep strange hours out there in Kent, don’t they? So strange that they need to use the last train of the day to Maidstone (which is what the 2217 hours service is). And something else doesn’t ring true about this one.

“It can’t leave until he finishes his one-hour break”. Why would a guard have to take his (mandatory) break just before a half hour trip to Maidstone? That would be seriously bad rostering. Ah well. What the Sun hacks aren’t telling their readers is that the 2217 does not just go to Maidstone. It continues from there to London’s Victoria terminus.

And from Victoria, it’s more than likely that there will be a return journey to Kent, before the train goes to stable for the night, so the guard was probably only half way through his shift. Plus, as many commenters have told, if operator Southeastern can’t sort their staff rostering, or they were caught with a temporary shortage, that’s part of that Stuff That Happens.

But that didn’t prevent one commenter going beyond the call of duty, with the priceless comment “the guard is entitled to his breaks, but not at the expense of others”. Message to whoever wrote that: there are lobby groups and think tanks that pay top dollar for folks who can spin like that. If you’re looking for a job, get your CV fettled up and sent out sharpish.

Conjecture but I would strongly suspect that under the new model management the guard had been treated in such a way that whatever goodwill he might have had was spent and he therefore worked entirely to his contract.