VISITATION OF THE BLESSED TONE

He was right, except, of course, for the occasions where he was right: no-one was going to lay a glove on Tony Blair when he appeared before the Leveson Inquiry today. And that included David Wakelin, who somehow managed to gain access to the courtroom for long enough to denounce the former PM as a war criminal. If only he had been a decade or so sooner with his initiative. 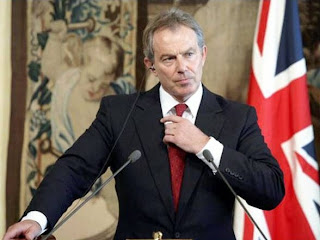 Questions? You want to ask questions?

And there was nothing for Rupe and his troops to fear in the Blair testimony: Tone asserted that Murdoch “did not lobby him directly over media policy when he was Prime Minister”, which sounds like a get-out until you realise that it does not exempt any indirect pressure, especially from Rupe’s variety of underlings, nor any influence that may have been wielded over other ministers.

But the former PM confirmed that there was a concerted effort to try and avert the welter of adverse press coverage that had dogged Neil Kinnock in 1992. In pursuit of this, much more effort went into the Labour media operation, with news management prioritised far higher than previously, via the unique insights of Big Al and Baron Mandelson of Indeterminate Guacamole.

Moreover, the papers that Blair deemed problematic were not the Murdoch ones, but those under the less than benevolent control of the legendarily foul mouthed Paul Dacre, with the revelation that what Tone called a “personal vendetta” against Cherie Blair (which is still going on, as I found recently) resulted in more than thirty legal warnings about the Mail’s coverage over the years.

Blair concluded that attacks on his family – which would have included the Carole Caplin stories and the Mail using her relationship with convicted con artist Peter Foster to get at Cherie – were “unnecessary and wrong”. After considering the attempt to attack his wife by trashing the memory of Pat Phoenix by the odious Quentin Letts (let’s not), one can sympathise with that point of view.

And it may well have been after considering Dacre’s central role in the now discredited Press Complaints Commission (PCC) that led Tone to his apparently fair and even handed conclusion on any new media regulator “The absolutely key thing is that it is seen as, and is, genuinely independent of the media and of the government”. So no place for the Vagina Monologue, then.

Blair may also have had the Mail in mind when he said of attacks by the press on his ministers “I felt some of the stuff crossed the line, completely ... if they were doing something a particular media group didn't like … it was really hard for them”. So if Murdoch was no big problem, the most likely target, once more, is Dacre and his attack goons. And he clearly wants their influence taken out of the regulator.
Posted by Tim Fenton at 18:37

What a spectacularly dull post. I'm not even sure what it's trying to say apart from "daily Mail - boo hiss," and "Tony Blair - war criminal, boo, but we lefties voted for him repeatedly so yay, but he was crap so boo, but he's labour so yay..." etc.

Tony Blair is making a couple of important points. The first is that there is a part of the media that indulges in character assassination. The second is that it isn't just the Murdoch press that does this.

Blair's case is weakened by a number of factors:-

- he has become a close friend of the Murdochs; even if, as he claims, this happened after he left office, it is very odd to be a friend of an important part of the feral media

- when he had the chance to make a speech about the feral media his example was the Independent and he failed to mention the Murdoch and Dacre titles; this suggests that, at the time, he was more worried about the forensic analysis of his policies in the Independent (especially about the invasion of Iraq) than he was about the nastiness from the Mail and the Sun.

- there is a contradiction between his assertions that some of the media can be very nasty, that his government had to devote a great deal of time to managing this, that he didn't change policy to placate them and the many examples of eye-catching (or eye-watering!) policy initiatives that look just like attempts at placating them. Either spin-operations such as "marching petty criminals to cash-points" were meaningless or Blair's government had bought into the whole Dacre/Murdoch on law'n order.

So Blair has made some useful points but the risk is that they'll be lost among the contradictions in Blair's position. He could make his points more strongly of he were to admit that making the Labour Party "electable" involved trying to get in tune with the nastiness in both the Dacre and Murdoch press.