As I keep on saying – you can see the evidence HERE, HERE, HERE and HERE – each manifestation of the turbulence affecting the EU, Eurozone and Euro is an event that occurs with the certainty of night following day. And whether it’s the Mail trying to induce a run on Santander, which I considered earlier, or the Telegraph picking over forms of words for morsels, the press misses the point. 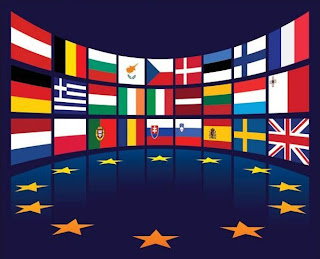 Moreover, those who spend much of their waking hours pretending that the EU is some great centralising Government-in-waiting, suggesting that “Brussels” is taking over decision making from individual sovereign states and that the UK is being subsumed into some kind of new dictatorship, are equally shown by events to be talking the most unmitigated tosh.

Because the lack of any central agreement and decision making – because, surprise, surprise, the EU is not an overarching and centralised superstate – is part of the reason for the problems that are now resulting in yet more market panics and, in Spain, a bank run. On this occasion, I agree with Young Dave when he says it could all get a lot worse.

Cameron has said, more or less, what I’ve been saying for some time: that more needs to be done “to persuade Eurozone countries to take really decisive action” instead of continually “kicking the can down the road”. And the largest player in this drama – Germany – has to face down its reluctance to make the decision that would calm markets and damp down the panics.

The Euro has to have a lender of last resort. This plain fact has been demonstrated over the years, first with Sterling and the Bank of England, and then with the US Dollar and the Federal Reserve. A currency can exist without such a lender, but the consequences will be not only what we are seeing right now, but also more of the same for the foreseeable future.

The European Central Bank (ECB) must become the Euro’s lender of last resort. The Germans are opposed, fearful of another Great Inflation, but the alternative, the loss of the single currency, right now looks a whole lot worse. That is the first step: following that decision, there must be agreement on two further steps, the first of which is that there will be more haircuts, more restructuring.

And the final step is that the single currency zone must do a lot more of what we in the UK call Regional Policy. It is not credible to inflict austerity on whole countries without there being some effort to kick-start growth and allow their economies to recover. That means resource transfer. It means taking difficult decisions. And it means stopping kicking that can down the road.

The alternative, as I said before, is an end to the Eurozone. No pressure, then.

[UPDATE 19 May 1030 hours: Cameron has, apparently, irked the French and Germans by telling them that the stronger nations in the Eurozone should support the weaker ones, which is, more or less, the "Regional Policy" point I made earlier. This has not gone down well, showing that Young Dave has made the difficult choice of being right, rather than being popular.

He's also urged relaxation of the rules governing the ECB, which sounds awfully like enabling it to be a lender of last resort - which I also urged - together with structural reforms. So, for once, I Agree With Dave. That's an entry for the Rare Events Diary, then]
Posted by Tim Fenton at 12:55