Never one to let a crisis go to waste, even if there may not be a crisis even on the horizon, is the Sun’s increasingly tired and repetitive political editor Trevor “the Sun is not a swamp that needs draining” Kavanagh, who has gone completely over the top in his latest attempt to panic readers with his apocalyptic vision of what is going to happen in the Eurozone. Or, more likely, not.

“If Greece implodes, taking £200BILLION in bail-out funds with it, the shockwaves will ripple through Europe’s banking system and beyond” he warns, before reassuring everyone by reminding them that we’re not in the Eurozone, which is A Very Good Thing. Except, er, “Britain, with hundreds of billions tied up in EU bank deals, is far from immune”. So what makes our hundreds of billions different?

Never mind, though: investors want to buy into the UK. “Their cash is pouring in to the UK, bolstering our Triple-A credit rating and, crucially, keeping down our own borrowing costs”. And that means “The Pound is on a charge, surging against other currencies after being flat on its back for three years”. It is? Erm, I wouldn’t be too sure about that, Trev. 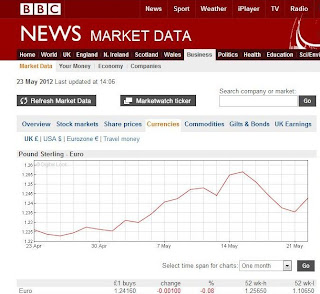 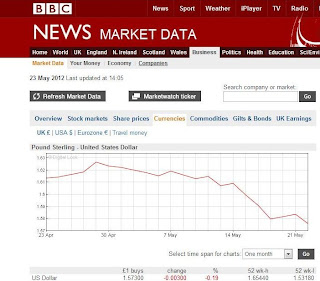 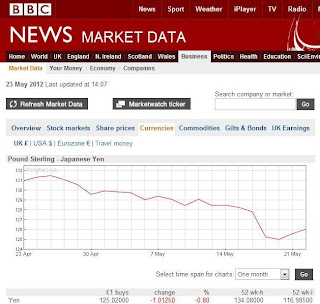 Here are trackers of Sterling versus the Euro (gaining maybe 2%, but nowhere near what the exchange rate was in, say, mid 2007), US Dollar (declining) and Japanese Yen (also declining). So perhaps that should have been “surging against other currency [singular]”. But go on, you’ve got more Euro horror stories with which to regale the more credulous among your readership.

For starters, there are bank runs there, and Trev knows where that is leading: “We would see overnight panic as savers raced to get their money out. Remember the fearful queues outside Northern Rock? They would be repeated outside every bank in Europe. Food riots would erupt in days”. There were food riots in the north east? Hey, I missed the meltdown in Newcastle on Tyne!

So who is leading this charge? Ah well. Trev says it’s the Italians: “Significantly, Italy is leading the charge for the first time ever as savers fear they will soon be back on the lira”. Yeah, yeah, yeah. Every time there’s a pundit churning out Euro bashing knocking copy, they dig up the “they want to go back to the Lira/Franc/Peseta/Escudo/Guilder/Schilling/Drachma honestly” meme.

Kavanagh is like a badly stuck vinyl disc: at best, there’s a regular scratching and ticking sound, and at worst it all gets jumpy, erratic and completely incomprehensible. Ultimately, even Sun readers are going to see through this ranting and just switch off, especially if he can’t bother to do a few minutes’ research beforehand (but then, that’s par for the course with too many hacks).

But it keeps him busy and in paycheques, so that’s all right, then.
Posted by Tim Fenton at 18:43