High speed rail travel is advancing across Europe: even in the UK, provision is being made for a new link from London to Birmingham and beyond. In Spain, a high speed line from Madrid to Valencia will open before the end of the year, expanding that country’s network yet further. And another new line is under construction to link Madrid to Lisbon.

But here we reach a problem: my information is that the last part of the new line, to take the tracks over a new crossing of the Tagus into Lisbon’s distinctively roofed Gare Oriente, has fallen victim to spending cuts. The new line will now end at the village of Poceirão. Jokes are going the rounds that prospective passengers will be able to finish their journeys by cycle (Poceirão’s existing station has just one train each way per day). 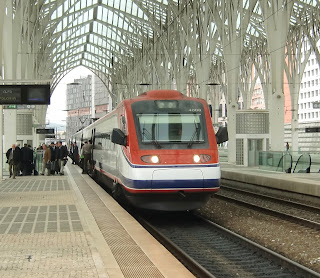 Gare Oriente, Lisbon
Seriously, though, this is a big project that has been axed: the “Third Tagus Crossing” was to have carried a six lane motorway on its top deck – demand on the other two crossings is heavy for much of the day – as well as two broad gauge rail tracks, enabling trains to the Alentejo and Algarve to avoid the slower and congested existing route.

Fortunately, a solution to the high speed rail part of this problem is at hand, despite the new line and existing Portuguese network being built to different track gauges. As I described some time ago, Patentes Talgo have been developing variable gauge trainsets for decades, and in partnership with Bombardier, have recently introduced high speed trains incorporating their ideas. 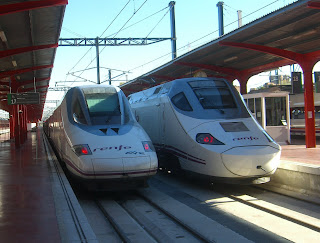 At left, what you will not see, and at right, what you might
So, providing agreement can be reached with the various parties, trains displaced by the opening of new lines in Spain could be redeployed to run between Madrid and Lisbon. There will be a speed penalty – top whack of only 250km/h rather than 300 or 350 – and the existing, slower approach to Lisbon will have to be used, but at least a service will be possible.

As to journey times, well, the aspiration for an airline busting 2 hours 45 minutes cannot be even approached, but 3 hours 45 to 4 hours should be within reach. Given that the only train connecting the two cities right now runs overnight, and takes well over nine hours, that’s quite an improvement.
Posted by Tim Fenton at 16:35

An improvement in one sense, but the Lusitania trenhotel is a great way to arrive in Lisbon, and must be one of the few overnight trains left where dinner, ensuite and breakfast are included in the Grand Clase ticket at a fairly realistic price. Until recently it used to allow unlimited alcohol in the restaurant too!

It will be a great shame to see it go (as it surely will) when the HSL opens.

I agree. Furthermore the time comparison alone isn't all. What also matters is the quality of that time. Thus, a cramped economy class seat on a plane is a pain even if I spend just an hour in it, whereas 9 hours on a comfortable night train including a fine meal and a good bed plus an arrival time that is sufficiently early that I have the whole day to do what I need make more sense to me than 4 hours on a modern designer train which basically eat into much of the day and the time actually spent at destination.