Pay Up Or The Tram Gets It

Most visitors to the city of Lisbon see the central Baixa district, the sights on or near the waterfront at Belém, and maybe take the train out to Sintra or Cascais. They tend not to cross the river.

And that means they miss a large part of the extended metropolitan area: the sprawl outwards from the ferry terminals at Cacilhas and Barreiro, and alongside the motorway that leads to the Ponte 25 de Abril, is extensive, and so much so that in recent years, rail transport links have been put in place to help in the demand for people moving.

The latest system to be inaugurated has been the Metro Sul do Tejo, a tram network running out from a terminus by the ferry landing at Cacilhas. The first phase was completed in late 2008 and the modern trams are now carrying upwards of 30,000 passengers per day. 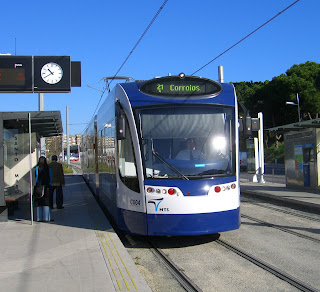 An MTS tram at Santo Amaro

However, the assumption on which the concession was let is based on a daily ridership of 80,000. This may come in the near future, but in the meantime, there is a mechanism for the Government to make up for the shortfall by means of a subsidy.

So far, so straightforward, but it seems that the Government is behind on its payments – well behind: apparently no subsidy has been received since the payment for the first half of 2009. The accumulated shortfall is 7.2 million Euro.

The concessionaire has now said that, unless the Government stumps up, push will come to shove next month. By that time, it will not be possible to pay the power bill, and so the current will be cut off (much as one might expect with a domestic disconnection).

And if the trams cannot run there, it is not outside the bounds of possibility that they might be sold on to another operator (the four section Siemens Combino Plus cars would be welcomed by capacity starved operators across Europe and perhaps beyond).

Then there really would be no way back.