First there was Brian Haw, protesting against sanctions, and later war, against Iraq. Then came the “Peace Camp”, a gathering of those objecting to the continuing involvement of the UK in conflicts abroad. Both of these were camped out in Parliament Square, across the road from the legislature.

More recently, those in the right leaning side of the blogosphere made adverse comment on those involved. The usual comments asking why these folks were not gainfully employed were followed by remarks about the smell around the square, though those urging action against the protestors stopped short of suggesting that suffrage be made conditional on regular bathing and clean underwear.

Eventually, calls were made for the mayoralty to exercise its power and clear the site. So it was that Alexander Boris de Pfeffel Johnson, occasional Mayor of London and regular collector of “chicken feed” from the Maily Telegraph, went into Action Man mode and commanded that Parliament Square be cleared of protestors. 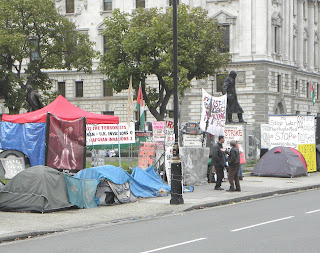 Under the gaze of Winshton and LG
But – and there is inevitably a but in such matters – even though Bozza had the grassy area not only cleared, but fenced off (so nobody could use it), Brian Haw and the Peace Camp have not gone away: they have merely decamped to the pavement outside the fence. 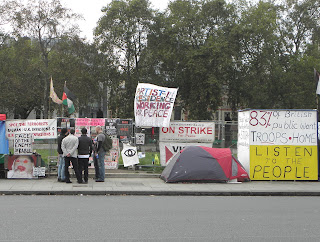 Haw's protest (left) and the Peace Camp (right)
The array of Haw’s banners has been reduced, but he and the anti-war protest remain in place. Added to these has come a protest apparently aimed at freemasons, this on the south side of the square. This, too, does not look as if it is for moving on any time soon. 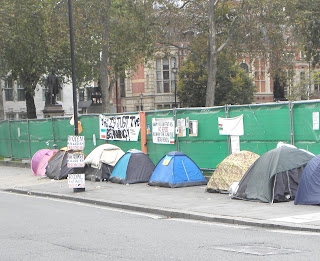 "This is just the beginning!"
So where are the calls for further action? And when is the green space of Parliament Square to be made available to the public once more? It might not earn him much in the way of additional “chicken feed”, but for Bozza, showing some leadership on the issue – without curtailing the right to protest – would not come amiss.
Posted by Tim Fenton at 12:10