When Good Old British Rail (tm) was taken apart with unseemly haste in the mid 90s, operators in mainland Europe looked on, and most decided not to follow the UK any time soon. However, there have been moves to bring new entrants into the rail travel market in Germany, the Netherlands and elsewhere.

Now the Government in Lisbon has decided to dip a toe in the water, with the city’s commuter network, and I expect that their counterparts in Madrid may be watching. Why? Well, in both Spain and Portugal – to the frustration of travellers from the UK – rail travel is not just rail travel.

Commuter services are run as a separate operation to Regional and Inter-Regional ones. Long distance services have two separate brands in Portugal, and in Spain ... there are so many brandings for them that I’ve lost count. All the various operations issue their own tickets, for use on their own services only.

So any one of those train types is already a self contained profit centre. The claim is that Lisbon’s Urbanos are covering 90% of their costs, and they would be making a profit, if only fares had not been held down for the past two years. But I don’t buy that: the costs being covered cannot include a full market rate for track access, and there is no way that the cost of the trains themselves is being met. 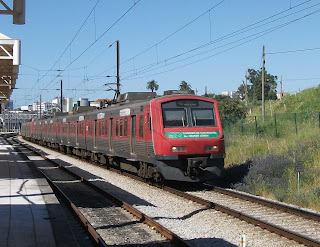 A Sintra Line train passes Entrecampos
From central Lisbon out to Sintra or Cascais, a full price round trip costs just three and a half Euro, with a monthly ticket at just under 36 Euro. Both are around 16 mile journeys. Even at peak times, there is nothing like the overcrowding that is routinely endured around London, Manchester or Leeds.

And whether ownership of the trains remains with current operator CP, is transferred to the concessionaire, or passes to a leasing company, needs to be decided. Also, there is a need in the next few years to begin fleet renewal on the Cascais line: the oldest of the trainsets are over 50 years old, and the “newest” in their mid-40s. There is no sign yet that those issues have been addressed. 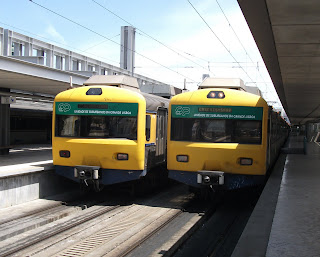 Neither has that of track access: were infrastructure owner Refer to be forced to cover more of its costs this way as a result of Government cutbacks – and cuts, as I’ve already observed, are being imposed across the Portuguese economy right now – this would have to be fed through into higher fares, as would the cost of new trains.

Nevertheless, there has been an expression of interest from two potential suppliers. One is Barraqueiro, who already run Fertagus, the only private passenger operator on the Refer network. But the Fertagus concession has already been renegotiated once, and passengers have voiced concern about high fare levels (they clean the graffiti off the trains, though). The other aspirant is Arriva, about whom Alex Ferguson might have mused “Arriva ... bloody hell”.