The Leaving Of Liverpool

With a coincidence which must have brought back painful memories, as the Government’s spending review was being digested by local authorities and public sector workers around the country, BBC4 broadcast the last episode of Alan Bleasdale’s Boys From The Blackstuff, set against a backdrop of early 1980s Liverpool, a once great city then in sad and apparently terminal decline.

In George’s Last Ride, we see former union firebrand George Malone sent home from hospital to spend his last days with his family. Son Chrissie pushes the wheelchair bound George around the former docks, past derelict factories and warehouses, as his father reminiscences about the past. Chrissie helps him out of his chair and George stands up to look out over a waterfront which saw its last ship dock many years ago.

And then George dies.

Bleasdale uses the event to make a symbolic point: in the 1950s, Liverpool’s population was 770,000. By the time the series was broadcast, it had fallen to around half a million, and fell yet further. All that many outside the area saw of the city was rioting, militancy, and yet more unemployment. 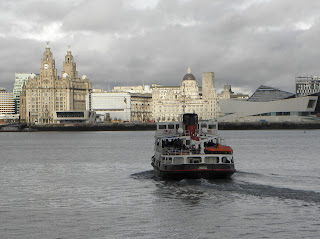 But in the past two decades, Liverpool has slowly got off its knees, and the city has reinvented itself. Those docks that had stood derelict have been transformed and reclaimed. New jobs have come. Liverpool is well established on the tourist trail. The city centre has been renewed. But there is one drawback: 40% of the city’s jobs are in the public sector.

Yes, cars are still built at Halewood and over the river at Ellesmere Port, but far less are employed here than thirty years ago. The private sector would be starting from such a low base that it could not absorb significant public sector job losses, according to the Chamber of Commerce’s CEO.

There are those on the right leaning part of the political spectrum who will, now as in the 80s, tell that Liverpool is a basket case which should be left to decline. In support of this view will come the usual uninformed characterisation of Merseysiders, supposedly authoritative think tank studies, and exposition of yet more of the economics that failed us in the 30s and 80s.

But that would be to miss the point: this is not about cheering on the right against the left, and nor is it about whether one economic ideology is superior to any other. It is, ultimately, about tens of thousands of real people, living real lives, with real hopes and fears about the future. For the inhabitants of Liverpool, that most human of people, the figures on a Treasury spreadsheet could bring the cruellest of news.