Power Bill – It Pays To Shop Around

Here in the UK, ordinary folks get to shop around for the best deal on their power supplier – electricity mainly, but also gas. But what if you’re in a rather bigger league – for instance, buying traction power for a rail network? Well, there are savings to be made there – and they add up to over a million Euro per year, even for the smaller buyers.

As infrastructure and operations have been separated on rail networks across Europe, we have got used to RFF as well as SNCF in France, Adif as well as Renfe in Spain, and Refer as well as CP in Portugal. And Refer have been putting their traction power contracts out to tender recently.

Even so, Refer provide less than half the traction power for their own network. Somehow, when train and track got separated, operator CP retained the (then) substation network. Only subsequently built substations belong to Refer, which must make for interesting calculations on cost allocation, especially now that the power returned to the wire – regenerated – is also part of the mix. 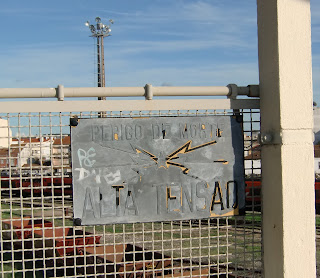 How much did Refer save on their annual electricity bill? Following the tendering process, the annual saving is claimed to be 1.2 million Euro. That has been achieved by switching from home supplier EDP to Spanish provider Iberdrola. Not to be outdone, CP claims that it has also made savings through renegotiating supply deals, to the tune of 2.2 million Euro annually.

That’s a saving worth making. For the much larger networks of countries like the UK, it would be interesting to see if the idea catches on.

In Innotrans, the ÖBB Infrastruktur network operator had a brochure with an even more interesting concept: pay the energy provider you have selected, depending on your location.

For example, you have a contract with Verbund on the route Salzburg-Wien, and to ÖBB Energy from Wien to Sopron (a rough example), the energy counter in your locomotive registers with the correct provider each time your locomotive crosses Wien.
Or at least, that's the way I understood it.

Network Rail has a contract with British Energy (the nuclear generator) to supply all its electricity, which I'm assuming was at a substantial discount to whatever they inherited when electricity supply was first privatised. It expires in 2014 - will be interesting to see who wins it this time round.