Despite the continuing inventiveness of its hacks and pundits, the Super Soaraway Currant Bun is clearly still in need of outside help in its campaign to tell readers, for the umpteenth time in less than a week, that the rotten lefty Labour Party is rubbish and they should all be voting for Young Dave and his jolly good chaps. Sadly, hack Craig Woodhouse drew the long straw in his bid to play the “Class War” card. 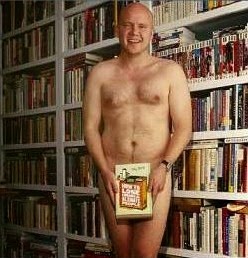 Behold the most credible source the Sun could find

That is because he has been forced to turn to the loathsome Toby Young in an effort to tell readers that Labour wants to rid the country of Free Schools, which as any fule kno are very wonderful, because the programme that unleashed them on the public was the work of Michael “Oiky” Gove, who just happened to be a Murdoch employee in his previous incarnation as a Times hack and leader writer.

“Free Schools ‘face axe if Labour win’” shrieked the headline. They do? That rather contradicts the policy put out by Tristram Hunt over the past, er, several months and rather a lot of TV interviews. So who says they ‘face [the] axe’? Ah well. That would be Tobes, “who set up three of the revolutionary ‘Free Schools’”. And Tobes “raised fears for their future as militant teaching unions held Red Ed hostage”. 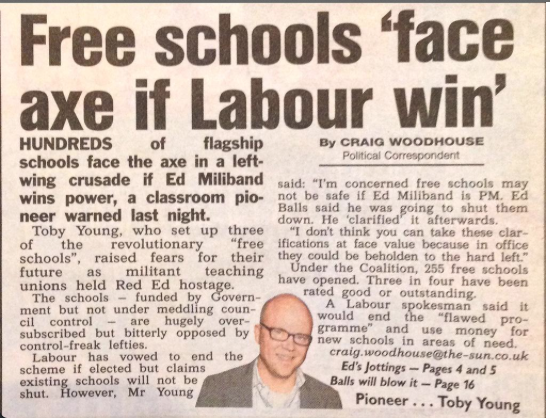 But let me put Tobes straight: he has nothing to back up his claim other than his own hot air. Zero. Zilch. Nil Nada. Not a sausage. Bugger all. The biggest threat to the Free Schools that have been started up under the stewardship of Himself Personally Now is not from any political party, but the dubious leadership and day to day control exercised by their management - or the apparent lack of it. Take the West London Free School (WLFS).

Zelo Street regulars will recall the appalling catalogue of bad behaviour that led to the departure mid-term of head teacher Sam Naismith (see HERE, HERE, HERE, HERE, HERE and HERE). There was also the expenditure of £9.25 million of taxpayers’ money - that’s our money, Tobes - on an office block in Hammersmith because Palingswick House was not ready for the school to move into - and not big enough even then.

Had Sally Coates not been parachuted in to steady the ship, WLFS could well have faced serious, if not terminal, problems. This has nothing to do with “class war”, but getting the basics of running a school right in the first place. To then whine that Sun readers should “look over there” at opposition politicians is not surprising. But it is equally dishonest. Toby Young should be looking to himself before blaming others.

And don’t forget, the Free Schools programme is well over £1 billion over budget.
Posted by Tim Fenton at 13:45

He was on the Today programme last Saturday with Christine Blower.She and James Naughtie spent a lot of the short debate correcting his assertions. Young wants to continue the current system of no local authority involvement, directly at odds with David Simmonds, Tory councillor and chair of the LGA’s children and young people board, who said: “However, if councils are not given powers to open new schools we could see extreme measures taken, such as converting music rooms into classrooms and putting portable buildings on their playgrounds, which will compromise the quality of education children receive.”

No one who allows himself to be photographed like that can be taken seriously.