Sturgeon Is The New Clegg

This morning, Corporal Clegg and his motley platoon may be basking in the quiet satisfaction of knowing that what happened to them in the run-up to the last General Election is not going to happen this time round. Almost five years ago, following the first of the Leaders’ Debates, Clegg, who was judged to have put in the best performance of the three party leaders taking part, was subjected to a vicious press assault. 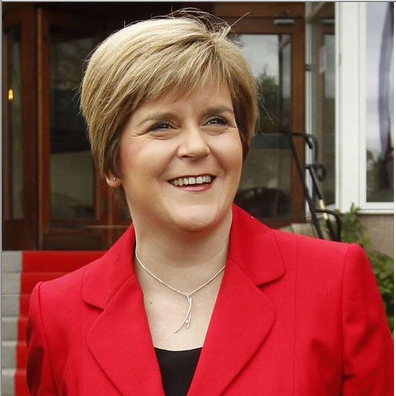 This woman is very scary - If your name is Paul Dacre

At the head of the attack was the legendarily foul mouthed Paul Dacre, commanding his crack, if not totally cracked, battalions of obedient hacks and pundits from the Daily Mail. The panic button was duly pressed at the thought of the Lib Dems preventing Young Dave from entering 10 Downing Street, and the Mail’s favourite subject of the past 80-odd years was recalled in order to put the boot in.

“CLEGG IN NAZI SLUR ON BRITAIN” thundered the headline. Was there a “Nazi Slur”? No, there wasn’t, but the Mail had persuaded credulous Tory MP Nicholas Soames to give them a suitably supportive statement. In the event, the Lib Dems’ poll numbers held up reasonably well, and Clegg became Deputy PM, something the Vagina Monologue has never forgiven, hence the continuing abuse dumped on him. 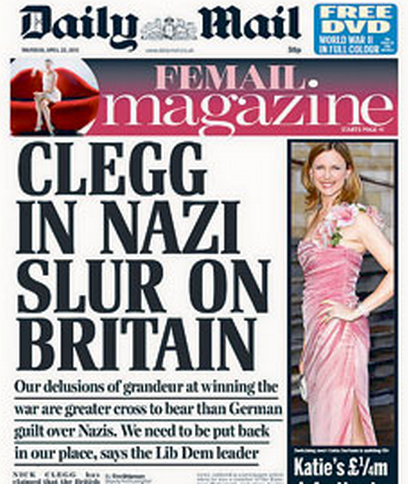 But this time Clegg will not be on the receiving end of the Mail’s monstering: after last Thursday’s TV debate, those in the Northcliffe House bunker have taken the decision to go after Scotland’s First Minister Nicola Sturgeon instead. The reasoning is straightforward: she gave a very good account of herself, her party may gain a lot of seats at the election, and the party most likely to benefit from their support is Labour.

This, for Dacre, is unforgivable: it does not seem to have occurred to him that the House of Commons is there to represent the whole of the United Kingdom of Great Britain and Northern Ireland. He is clearly betting that it hasn’t occurred to his readers, either. So they are told that, unless they do as instructed and vote for Young Dave and his jolly good chaps, those damn provincials from the far north will run the country by proxy. 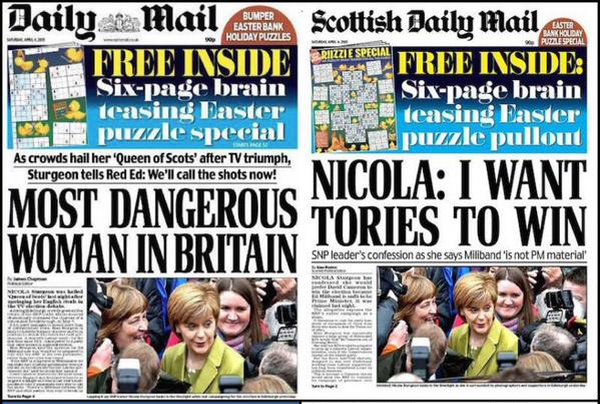 And that’s total crap. What is worse for the Mail, not only has the paper run different headlines on its English and Scottish editions this morning, images of the two front pages are now being widely disseminated via social media to demonstrate Dacre’s hate and hypocrisy. English readers get “MOST DANGEROUS WOMAN IN BRITAIN”, the angle being that Ms Sturgeon is some kind of rotten lefty.

But Scots are told “NICOLA: I WANT TORIES TO WIN”, trading on the Telegraph’s assertion that it has seen a memo that nobody concerned seems to know about. The angle there is to suggest the SNP is in league with the hated Tories, the party which the Mail would like to see benefiting from their attack. Confused? Dacre might be, but more and more of his readers will have rumbled his nasty agenda.

The Clegg attack didn’t work. This one won’t work either. Will it deter the Mail? Will it heck. Roll on the next smear campaign. There’s still more than four weeks to go.
Posted by Tim Fenton at 13:54

First, I can't see how the Mail/Telegraph's attack on Sturgeon works to the Tories' advantage since the SNP votes would most likely go back to Labour.

Second, isn't this as much about the allegation that Sturgeon said Miliband wasn't 'prime ministerial' enough? In other words, their real target is Labour - except they're being too clever by half in trying to to do it.

Aside from the strong denials, a particularly good rebuttal from Sturgeon in The Graun today:

"In the meantime, I repeat my challenge to Ed Miliband: if together our parties have the numbers required after 7 May, and regardless of which is the biggest party, will he and Labour join with us in locking David Cameron out of Downing Street?"

I think from the polls, but definitely from my own personal observations, isn't it overwhelmingly female viewers who were impressed by Sturgeon, who are also, of course, the main Mail readership.

Someone's going to get hurt in this collision, and its not Sturgeon, its the Mail.