The Super Soaraway Currant Bun, which, on the direction of Creepy Uncle Rupe, has followed the Telegraph and abandoned all pretence of allowing its readers to receive a balanced view of the forthcoming General Election, has used yesterday’s “letter” to the Tel, signed by all those “business leaders”, as the basis for another mainly fictional attempt to tell that Labour is engaged in some kind of “attack on business”.

This is allied to another fictional concept, the “lurch to the left”, along with the over-use of one Charles Dunstone, the Carphone Warehouse man, because he once passed favourable comment on Labour. What the Sun manages not to tell readers is that Dunstone is one of the “Chipping Norton Set”, a pal of their former boss Rebekah Brooks, and also a weekend neighbour of Young Dave. 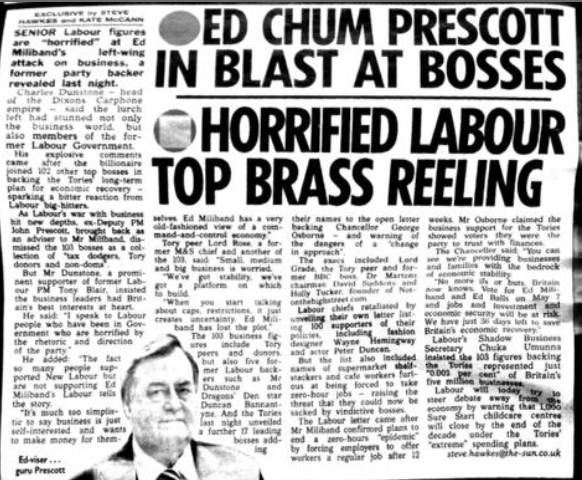 The Sun has been secreted away behind a paywall, but a Zelo Street reader has made a screen shot of the article available (see how that works, Rupe?). It is titled “ED CHUM PRESCOTT IN BLAST AT BOSSES … HORRIFIED LABOUR TOP BRASS REELING”. What has Prescott done? Pointed out that there are a significant number of Tory donors in that list of “business leaders”. Which there are.

So what of the “horrified” Labour “top brass”? The claim is attributed to Dunstone, but to be fair to him, the Sun puts it in quotes, probably because what he said was not sufficiently incendiary for the hacks’ liking. What we do know is that, while Dunstone claims “I speak to Labour people who have been in Government who are horrified by the rhetoric and direction of the party”, he is unable to name check one of them. 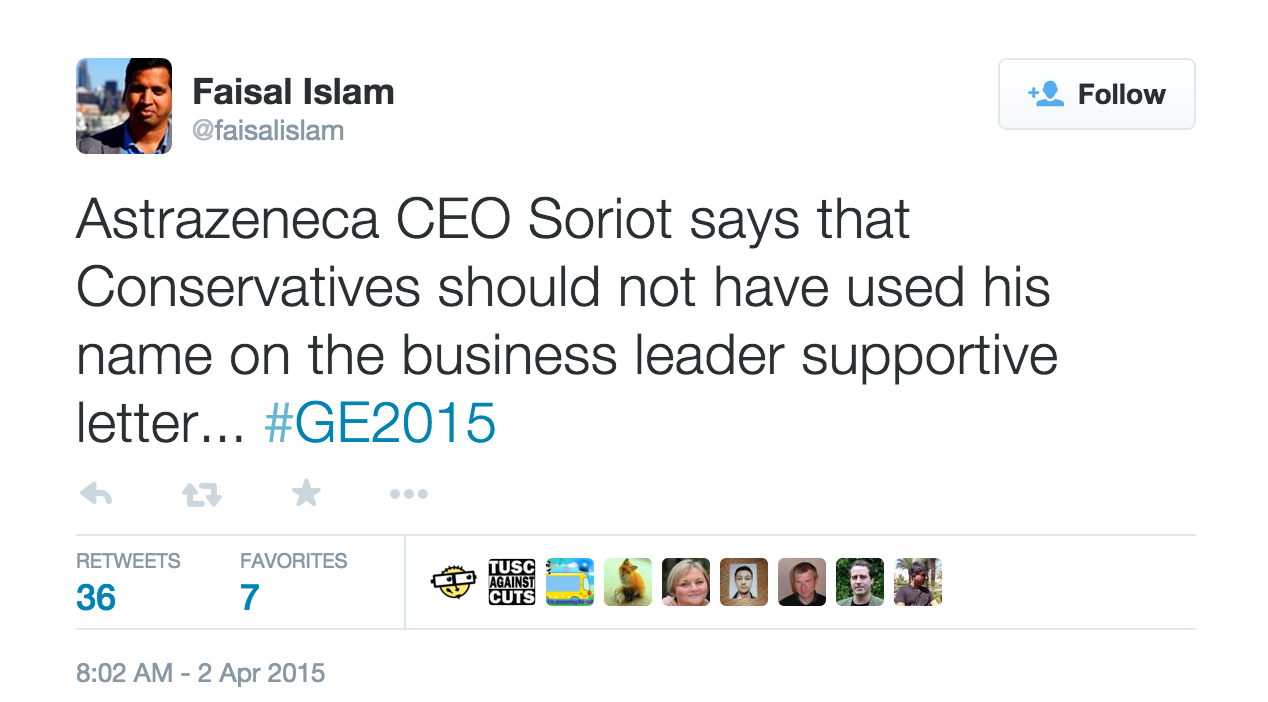 While Steve Hawkes and Kate McCann were trying to spin the idea that the businessmen who signed the Tel’s letter were not part of a piece of Tory Party propaganda, though, it had already been revealed that the party had indeed been behind it - and this was underscored today when Pascal Soriot, CEO of AstraZeneca, said “that Conservatives should not have used his name on the business leader supportive letter”.

So when the Sun claims Dunstone “joined 102 other top bosses in backing the Tories’ long-term plans for economic recovery”, not only is that number suspect, but also it seems Sun readers are not being told that the “letter” wasn’t something that business people had originated themselves. They may not be told, also, that the Tories are still trying to deny they were behind the letter, pretending it was some kind of spontaneous gesture.

Meanwhile, the Sun is trying to threaten its readers away from supporting the Labour approach to zero-hours contracts: for those who signed that party’s letter, the paper says this is “raising the threat that they could now be sacked by vindictive bosses”. You mean the kinds of people whose praises you’ve just been singing, Sun people? They sup some strong stuff over at the Baby Shard nowadays.

They might as well just tell readers to vote Tory. Which they will be doing soon enough anyway.

[UPDATE1 1810 hours: now the CEO of Ladbrokes has also distanced himself from the Telegraph letter.

Jim Mullen "wrote that the company has made clear that it does not endorse any political party and would not seek to tell its employees or customers how to vote".

What you will not read in the Sun. Or the Telegraph. No surprise there, then]

[UPDATE2 3 April 1015 hours: and another of the signatories has distanced himself from the letter, which was not a Tory Party stunt, honestly.

As the Guardian has told, "Lord Bilimoria, the independent cross-bench peer, told the Guardian that he was 'unhappy' that the letter, which first appeared in the Daily Telegraph on Wednesday, gave the impression that he was a Conservative party supporter".

Probably as well they got more than a hundred to sign up, then]
Posted by Tim Fenton at 17:28

If its "The Sun Wot Lost It" this time around, I wonder who will be sitting on that step?