At the end of the evening rush hour, those of us who can then relax at home or on a night out should spare a thought for the poor souls clearing litter from trains and buses in and around London: from Underground to Overground to far-flung depots at places like Colchester, Northampton and Brighton, hundreds, if not thousands, of copies of the Evening Standard are being collected and sent for recycling. 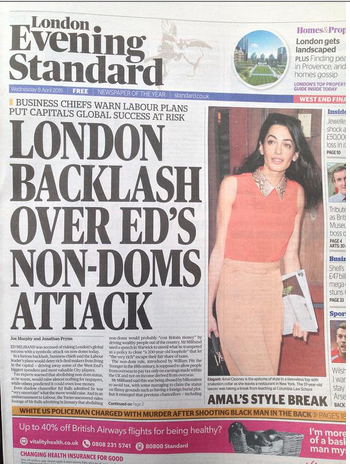 The capital’s only surviving evening paper is now a free sheet: thus many take a copy without having to consider whether it is worth the expenditure. And from the inevitable pages of Foxton’s adverts, what those commuters are reminded of, every weekday, is that most of them should not even bother thinking about getting on London’s property ladder. They can’t afford it, and boy, does the Standard let them know.

But those commuters, just because they haven’t got the means to pay those obscenely inflated property prices, are not stupid. They also know that one of the main drivers for astronomically priced new developments and the bidding up of values elsewhere is the money rolling in from abroad, and much of that is in the hands of people who are, for tax purposes, not domiciled in the UK. Yes, they are “Non-Doms”.

So one can easily imagine their reaction to yesterday’s Standard front page headline: “LONDON BACKLASH OVER ED’S NON-DOMS ATTACK” it thundered. Readers were helpfully told “Business chiefs warn Labour plans put Capital’s global success at risk”. Er, excuse me, but this is self-interested bullshit. London’s success, global or otherwise, depends on all those at the bottom of the pile as much as those at the top.

The editorial is real bleating stuff: “if those very wealthy individuals decide that it just costs too much to live here, London in particular would lose out from lost consumption and some employment … Simply attacking non-doms … in order to signal to the electorate that Labour is against privilege is not a helpful way to plan a tax regime … Reform of the non-dom system seems unarguable; abolition is quite another matter”.

So there you have it, Standard readers: your only evening paper says you should just suck it up and keep wishing that, one day, you’ll be able to put down a deposit on property a little closer to Charing Cross than somewhere half an hour’s drive from Tring. Because the paper you skim through and leave on the seats for some poor soul at Northampton or Bletchley to clear away says you have to yield to non-doms.

And who owns the Standard? As if you need to ask: the Lebedevs. Whether it is Alexander or Evgeny, are we, perchance, talking about, er, non-doms? If so, this is just another exercise in self-interest, those with money commanding those without to know their place. In any case, it is a clear demonstration that the Evening Standard is utterly divorced from its readership and their concerns. And that’s not good enough.

Get real, Standard people. You have a readership beyond Foxton’s customers.

[UPDATE 1440 hours: as if to show how out of touch the Standard is, Adam Bienkov at politics.co.uk has noted that "According to the snap FirstVerdict poll, 77% of people support removing the non-com tax break on wealthy UK residents, with just 20% opposing it".

Will Sarah Sands and her team re-think their line on this one? Don't hold your breath]
Posted by Tim Fenton at 10:42

As a reader of the i newspaper I'd also like to ask the same question of the Lebedevs. Their hand-wringing campaigns to highlight high property prices in the capital (alongside photos of the paper's owner) have been shown here to be sanctimonious and hypocritical.