In the third film of the Bond franchise, Goldfinger, 007 declares that the ‘53 Dom Perignom must be chilled to a temperature of 38 degrees Fahrenheit. To do otherwise was “As bad as listening to the Beatles without earmuffs”. The year was 1964; the Fab Four were on their way to conquering the USA. The remark has gone down as one of the most uncool moments in all Bond films, and there have been a few. 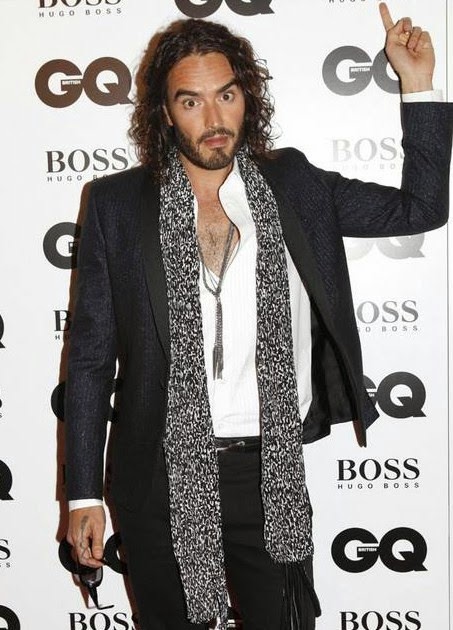 Dave doesn't rate him? So who does he rate?

Perhaps he will get away with it, but Young Dave has made a similar misjudgment this morning, perhaps driven by his innate peevishness: on hearing that Mil The Younger had visited Russell Brand, instead of shrugging off the questioner and pretending not to notice, he decided to come over all superior and dismissive. The idea of “hanging out” with the likes of Brand was clearly beneath him. Jolly Good Sheow!

As the Independent has told, “Responding to the news, the Prime Minister said, ‘Politics and life and elections and jobs and the economy, it’s not a joke; Russell Brand’s a joke...This is not funny. I haven't got time to hang about with Russell Brand … Don't listen to Russell Brand, get out there with your stubby pencil!’” I’ll leave my stubby pencil exactly where it is, thanks. Has Dave thought this through?

Russell Brand has more than nine and a half million Twitter followers, or, put another way, around a million less than voted for Cameron’s party at the last General Election. His YouTube channel has almost 1.1 million subscribers. To borrow from the Heineken advert, he reaches the parts of the electorate that other popular figures cannot reach. He cuts through to many who are disillusioned with the political process.

Great judgment there, Dave ... or maybe not

And the leader of the Conservative Party has just snootily dismissed him as “a joke”. That would be the bloke who has found plenty of time to “hang out” with all manner of people whose public image is, shall we say, less than totally bright and shiny. Like, oh I dunno, oh look, there he is with professional motormouth Katie Hopkins! Yes, the one who called refugees “cockroaches”, who were “spreading like norovirus on a cruise ship”.

Who else has Dave mingled with in the recent past? There’s Andy Coulson, whom he gave a job at the heart of Downing Street, despite being warned that this was not necessarily a good idea. And how about Gary Barlow, who has recently encountered a little local difficulty with tax avoidance allegations? Then there is Jeremy Clarkson, who Dave wanted the BBC to forgive, even if he had smacked a Top Gear producer.

It gets worse: Cameron and the twinkle-toed yet domestically combative Rebekah Brooks go back a long way - who can forget the horse-sharing and Dave’s sucking up to Creepy Uncle Rupe? He had no problem “hanging out” with any of them. But when Miliband called on Russell Brand, and Dave didn’t, he had his “Goldfinger Moment”, snootily and jealously dismissing the whole thing as “a joke”.

If Russell Brand needed any encouragement to endorse Miliband, this would be it.
Posted by Tim Fenton at 13:23