Politician Prepares For Debate No Shock

Both the Sun on Sunday and Sunday Times are secreted away behind a paywall, but a Zelo Street regular has made available the relevant screen shots (see how that works, Rupe?) to show that the desperation in the Murdoch poodles’ attacks on Mil The Younger has gone beyond mere barrel scraping, and they are now onto their Fred Flintstone tribute act (that means they’ve reached Bedrock). 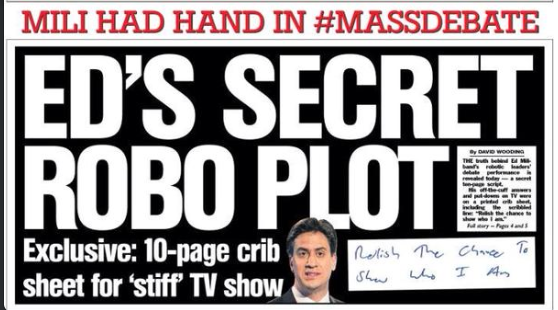 The Sun’s Sunday political editor David Wooding has his name on one of the lamest by-lines ever to come out of the Lame faculty of the University of Lame in the lame city of Lamesville, as he proclaims “ED’S SECRET ROBO PLOT … Exclusive: 10-page crib sheet for ‘stiff’ TV show”. This reveals that the Labour leader prepared for last week’s Leaders Debate at Media City. Just like any party leader would!

So Rupe’s downmarket Sunday troops have loaded all their Easter eggs into one singularly uninspiring basket. “Politician caught preparing for debate” has precisely no news value whatever. That someone has picked up what look like Miliband’s discarded crib notes has hardly any more worth, other than to show that his handwriting can be, shall we say, challenging to decipher at times. 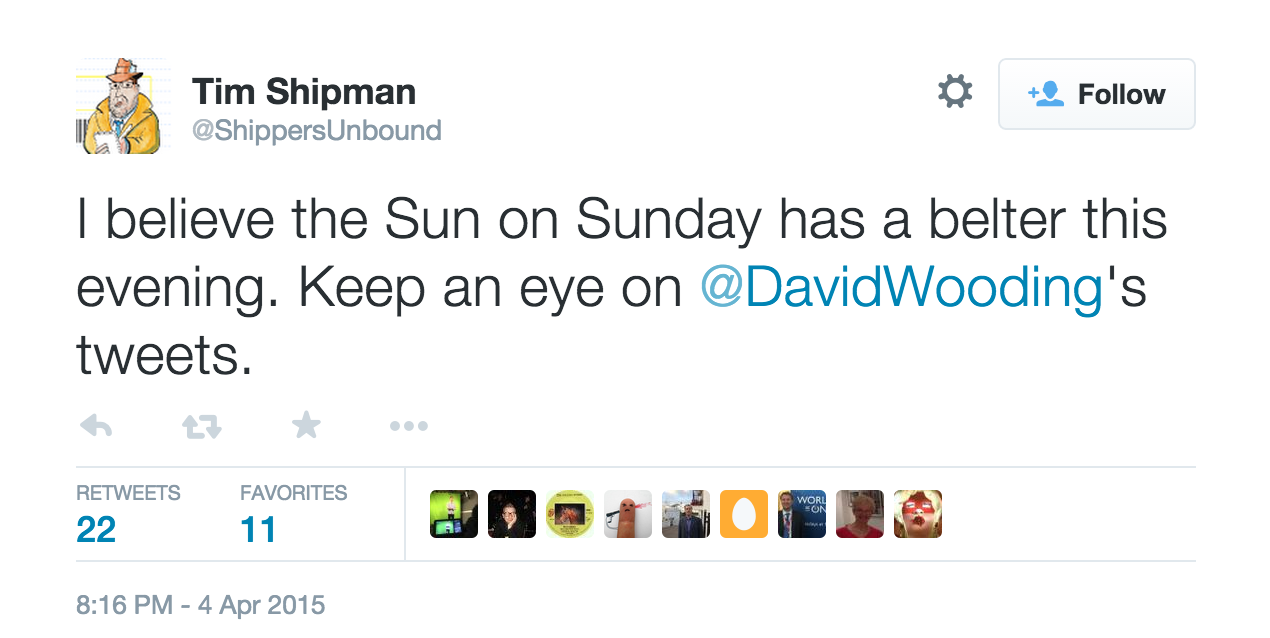 Otherwise, this is, as with yesterday’s “body language” attack, yet another nasty piece that can trace its lineage back to 1984’s “Benn On The Couch”, as witness “bizarre motivational notes … hush-hush game plan … gives a rare insight into the inner workings of his mind … lays bare how he tried to psych himself up for the showdown by scrawling ego-boosting pep notes … cyborg-like”. Yeah, see, he’s odd, innit?!? 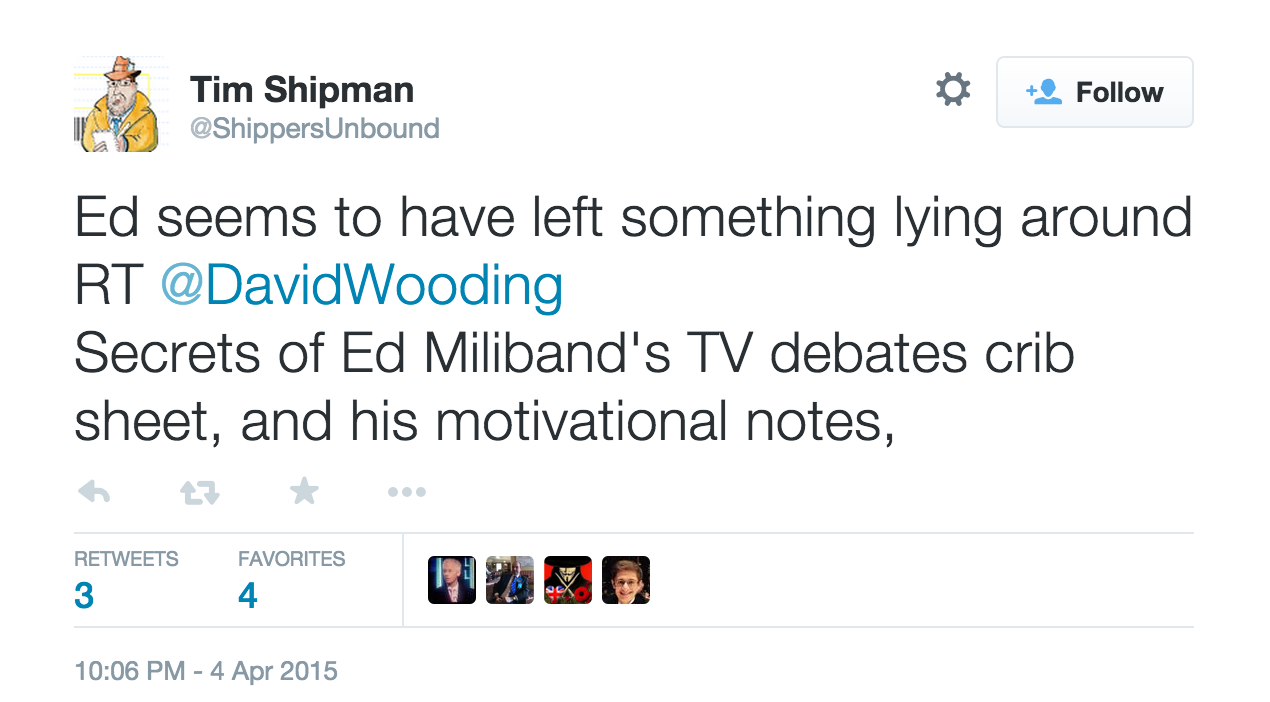 And the very worst of howlers comes as Wooding claims Miliband was “telling himself to behave like a ‘happy warrior’”. Er, hello David? You do know that this is a reference to a well-known William Wordsworth poem? Either Wooding does not know his English literature, or he’s insulting his readers (the reality may lie somewhere between those two). Worse still is the use of the supposedly upmarket Sunday Times to run the story again.

The paper’s political editor Tim Shipman - ex Daily Mail - was also on board: “I believe the Sun on Sunday has a belter this evening. Keep an eye on @DavidWooding's tweets … Ed seems to have left something lying around … Scripted responses are sensible but ‘happy warrior’ is dangerously memorable”. Yes, Mr S., it’s memorable because it’s Wordsworth. But you and your pals have your script to stick to.

Journalists with decades of experience behind them, and capable of searching out stories and turning them into memorable copy, have given up all pretence of independent thought in a lame attempt to inflate “Politician rehearses for TV debate” into so much psychobabble and knocking copy. “Oops! Miliband forgot his debate crib sheet” chirps the Sunday Times headline. More like “Oops! Hacks forgot their ability to think for themselves”.

Can it get yet more lame? It certainly can - four and a half more weeks of this to come.

[UPDATE 6 April 1555 hours: It certainly could get more lame, as the Sun has decided to use this non-story as an excuse to kick the hated BBC, chucking in the odd blatant lie as it does so. 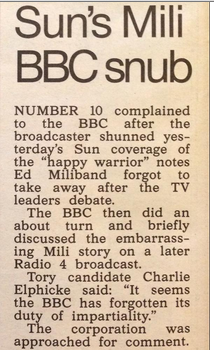 Under the headline "Sun's Mili BBC snub", readers are told that "Number 10 complained to the BBC after the broadcaster shunned yesterday's Sun coverage of the 'happy warrior' notes Ed Miliband forgot to take away after the TV leaders debate".

Wrong: as election purdah rules dictate, Number 10 did no such thing. Perhaps they mean their pals at CCHQ. The paper remembered in time to quote rent-a-gob Tory Charlie Elphicke, who seems to think that the decision to base its news coverage on news, rather than partisan knocking copy, has something to do with the Beeb's impartiality, which it does not.

So the broadcaster may have mentioned the non-story later. Have I got news for the faithful Murdoch retainers: the BBC is there to serve all the public, not just the inmates of the Baby Shard bunker. Still, good to see the usual level of accuracy from the Sun - not unadjacent to zero]
Posted by Tim Fenton at 11:12

Are these people not embarassed?

I hear the note was in Zinoviev's handwriting...