You didn’t know that Rupert Murdoch was a US Citizen? After today’s toe-curlingly over the top Sun front page, it’s something you can’t avoid. There, in large letters, is a DEATH NOTICE for The Special Relationship. But is the relationship between the UK and USA really that special? And have successive Presidents always defended our interests, as if they were their own? 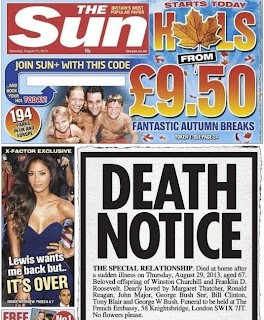 The answer is, no they haven’t, and here’s six examples. As Rupe’s downmarket troops have cited the friendship of Winshton and Franklin Roosevelt as the start of their golden era of UK/US cooperation, I’ll start with the immediate aftermath of that, as World War 2 ended. Britain, at this stage, was in a parlous financial situation. The last thing we needed was for an ally to withdraw its support.

And that is exactly (1) what the USA did, in September 1945, as President Truman cancelled Lend-Lease: this concept did not just involve military supplies, but also foodstuffs, road and railway equipment, and medical supplies. Anything still in transit had to be paid for, albeit at a discount. The USA compounded their playing hardball when asked for a loan to tide the UK economy over.

There was a lag between an economy geared to a war footing, and one able to concentrate on civilian goods, especially those which could be exported, and thus help alleviate the country’s indebtedness. Keynes was dispatched to Washington DC to try and negotiate a loan for this purpose. (2) The US treasury demanded that Sterling be made fully convertible as a condition of granting the loan.

The UK Government complied, and the loan was used up in a matter of days, as those who had hoarded unconvertible Sterling during the war years eagerly exchanged it for US Dollars at the rate of $4.02 to the Pound. The USA had caused its best buddy to become yet more indebted. True, the Marshall Plan arrived later, but the damage had been done.

Then, in 1956 (3), after Eden had deceived Parliament and secretly arranged with France and Israel to attack Egypt in an attempt to recapture the Suez Canal, Eisenhower demanded that the parties desist. Had we not done so, the run on the Pound would have been catastrophic. Ike’s GOP successor Ronald Reagan (4) was little better when confronted with the Argentine invasion of the Falkland Islands.

Ronnie (5) didn’t even bother to tell us when he launched an invasion of Grenada, which was, and remains, a part of the British Commonwealth which recognises Elizabeth II as its head of state. And Dubya Bush (6), also mentioned by the Sun, would have been more than happy to go off to Iraq without us in 2003. So when the Sun tells of a “special relationship”, one has to ask: what “special relationship”?

Not that Murdoch’s papers will be telling their readers about all of that, of course.
Posted by Tim Fenton at 16:42

The special relationship that allows us to buy $1,000,000 American missiles and fire them at targets decided by the USA. Imagine purchasing a new car on condition that you can only drive it to and from places set out by the sales rep.

The special relationship that allowed funds to be collected for irish terrorists within the USA, blocked extradition of wanted terrorists and embargoed the sales of defensive weapons to the RUC.

The special relationship that has people extradited for financial deals which were conducted (and legal) within the UK but the US still claims jurisdiction on them.

The special relationship that has people arrested at Heathrow for annoying and embarrassing the American government. And how come the American files he was carrying contained so much personal data about UK intelligence officers?

With any luck Rupe will give up on this country.