Another day, another lame attempt to rubbish the HS2 project which, like so many of the other lame attempts to rubbish the HS2 project, has been based on no analysis at all, save for the director general of the Institute of Directors (IoD) to airily wave his hand and tell anyone that is listening that it is a “grand folly” and that “the business case ... simply is not there”. 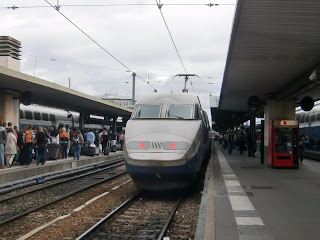 Do we get any facts and figures? You jest. That kind of detail ended when the IEA “report”, the one that pretended the cost of HS2 could reach £80 billion, got rumbled as another work of fiction yet more shameless than the stream of knocking copy that had gone before it. But this does not deter the well-organised, but fact-free, chorus of voices demanding cancellation. 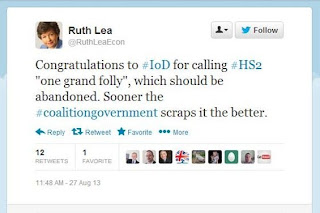 One pundit congratulates her own side ...

Among these is the supposedly thoughtful Ruth Lea, who congratulates her former employer on not volunteering any argument against HS2 other than bluster. She is joined by MEP and occasional Tory Dan, Dan the Oratory Man, who demands “Instead of firehosing cash at the HS2 boondoggle, why not spend a twentieth of the sum on giving everyone rural high-speed broadband?” 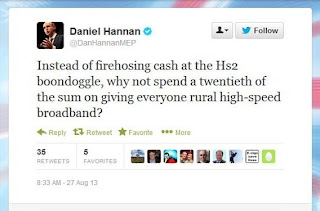 ... while another practices for his next Fox News appearancee

Yes, sadly, Hannan hasn’t figured out that construction hasn’t started. And, as the man said, there’s more: the humourless Matthew Sinclair, chief non-job holder at the so-called Taxpayers’ Alliance (TPA), approvingly quoted the IoD propaganda and called it “damning”, which is rather easier than having to stand up any of the routinely dishonest analysis he and his pals have been churning out. 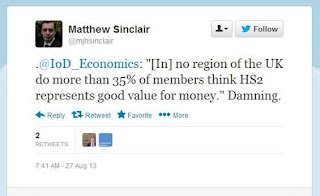 But pride of place has to go to Mark Wallace, formerly of both TPA and IoD, and now at ConservativeHome, who has penned “Is there anyone left who still supports HS2?” today. Things, he tells, just keep getting worse for HS2. They do, Wal? Do tell. Well, the IEA says so (debunked), the treasury says so (but not officially, for some reason), and Tim Montgomerie says so too (addressed HERE)! 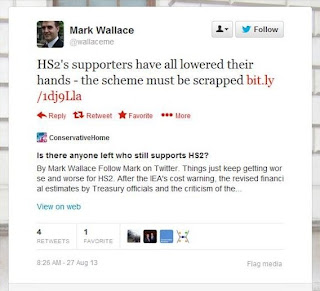 There are then several paragraphs of padding, before Wallace suggests we build more airports instead, and declares rail technology obsolete because TPA stooge Allister Heath at City AM says so: yes, self-driving cars are the future (addressed HERE). Did anyone call for a chorus of “Monorail”? But the worst thing about Wallace’s piece is that, in sixteen paragraphs, he fails to address one point.

That point can be put plainly, and directly: the rationale for HS2 is to provide more capacity to move people, and freight, between London and the South-East, and the North of England (and potentially beyond). Neither the IoD, nor the ASI, nor the IEA, nor the TPA, have provided a satisfactory alternative. So let’s see that point being addressed, rather than the attempt to shout down debate.

That, of course, would mean thinking positively. So don’t expect it any time soon.

[UPDATE1 1940 hours: Mark Wallace has responded to my post by showing that addressing the central issue at the heart of the HS2 project - capacity - is beyond his intellectual capacity. 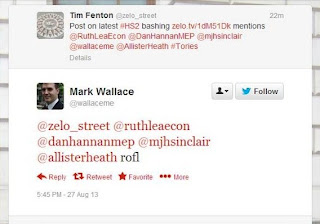 And there, folks, it proof, if proof were needed, of how much the HS2 bashing fraternity really know about the whole business, and how seriously they take the continued economic well-being of the UK]

[UPDATE2 28 August 1155 hours: it now appears that Mark Wallace's assertion that "HS2's supporters have all lowered their hands" was yet another example of his tendency to veer from spin to forthright dishonesty, as ConHome has had no problem finding a Tory MP, Paul Maynard (Blackpool North and Cleveleys) to give his support for the project.

Zelo Street regulars may recall the example from last September where Wallace had suggested the Derbyshire Unemployed Workers' Centres (DUWC) were using public funds to pay for the notorious Margaret Thatcher T-shirts. This was due to a combination of Wallace not bothering to put the question to DUWC - which I did - and his failure to understand such things as audit trails.

I would hate to think that Wal made his assertion about HS2 supporters in the same way - through not bothering to ask around beforehand. That, of course, would be both shameless, and inexcusably bad practice, and that would never do]
Posted by Tim Fenton at 17:34

I've recently joined the anti HS2 brigade, not because I am tory with financial interests but because it seems that the original business premis of the scheme should be re-evaluated. I spent last six years as a union rep going back and forth from Birmingham to London and have seen the use of the line change both in customers and numbers, less people doing more work on laptops etc,. Important issue is that trains relatively empty in the morning going from London, much fuller from Brum.
I know its anecdotal, but have got used to travelling less because of video conferencing and Skype,
So feel that the business case is now out of date, needs a retkink

Actually, Bob Woods, I understand that the business case was recalculated if you count time spent on a train as partially productive - and it went up. The reason is that although the value of time saved went down for existing rail passengers, it was more than offset by modal shift from car, where travel time suddenly becomes productive. (I personally think business cases are a waste of time when considering long-term projects - I know the rules for how you calculate them and there's so much margin of error they're meaningless, but that's another debate.)

Anyway, Tim, I've been grilling IoD over their proposed solution to overcrowding on the London Midland services. To be fair, they made a reasonable attempt to address the issue, but there's so many flaws in their proposal I suspect this was a afterthought. Oh, and I'm talking to a policy unit, and I know from bitter experience (having worked for one) that policy units tend to decide on a conclusion first and evidence second. As I earned a PhD doing the opposite, I look dimly on that sort of practice.

Do you fancy a copy of what they sent me and what I sent back?

The problem with Bobs view is that he has a developed a variation of the London commuter belt view. "My bit is OK, why bother doing anything?"

Whilst the service between Brum/ Herts&Bucks/ Chilterns and London is adequate all these realatively happy people are in the way of others. Telford-Shrewsbury and Blackpool have just been refused paths for trains to London. The logical fair extension of the anti-HS2 argument is to scrap the entire agreed WestCoast timetable and give a load of the short distance southern end paths to longer distance services for places that currently can't have them. From a national point of view this would be fair and sensible and you would expect the anti brigade to support it. Except the core of the anti brigade are people who would lose out. How could they live if the equivalent to current Virgin Euston- Birmingham service ran from Marylebone and took 20 minutes longer? What would the Chiltern commuters say if their trains took 5 minutes longer because they were held to let new Birmingham expresses go past?

We shouldn't be having a pro/anti HS2 debate. It should be a national rail use strategy debate with the possiblity that people in the south may lose out to those in the north. With that option hanging over them I think southern support for HS2 may rise.